Since joining Caterpillar in 1993, Bob has held numerous positions including tracked excavator marketing representative in Gosselies, Belgium and wheeled excavator marketing representative in Munich, Germany from 1993-1995 and 1995-1996, respectively. From 1996-1998, he held a field sales representative position in London before moving back to Gosselies for a marketing supervisor position from 1998-2001. In 2001, he was named sales manager for EAME marketing in Copenhagen and in 2004, moved to Peoria for a marketing manager position. In 2006, he became district manager for EAME marketing in Rome before he became a regional product manager for the Earthmoving Division in 2010. In 2013, Bob was named worldwide product manager for the Earthmoving Division and in 2015, the Caterpillar Board of Directors named him vice president with responsibility for the Excavation Division, located in Singapore, with worldwide, end-to-end responsibility for tracked and wheeled hydraulic excavators. The Board of Directors appointed him group president of Construction Industries in 2017 and in June 2018, Bob became group president of Customer & Dealer Support, which later transitioned to Services, Distribution & Digital.

A native of Antwerp, Belgium, Bob graduated from Catholic University of Leuven in Belgium in 1992 with a M.S. in mechanical engineering. He then received his MBA from EDHEC University in France in 1993. Bob has also completed the Executive Management program in partnership with Stanford University. In addition, he is a member of the Board of Directors at AGCO, a worldwide manufacturer and distributor of agricultural equipment.

Bob and his wife Isabelle have two children, Marie and Robbe, and they currently reside in Chicago, Illinois. Bob enjoys quality time with his family and is an avid participant in triathlon competitions. 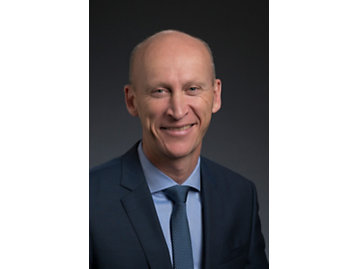