PEORIA, Ill. — Caterpillar Inc. (NYSE: CAT) today announced its board of directors has elected Kelly Ayotte as a member effective immediately. Ayotte, 49, is a former U.S. senator representing New Hampshire (2011-2017). She served as New Hampshire’s first female attorney general (2004-2009) and, prior to that, she was deputy attorney general and chief of the Homicide Prosecution Unit in New Hampshire.

“During her career as a public servant, Kelly has distinguished herself and has been widely recognized for her independence and her ability to work collaboratively across political lines to serve the best interests of her constituents and her country. I look forward to working with her on the board,” said Caterpillar Chairman Dave Calhoun.

As a senator, Ayotte was a member of the Commerce Committee, where she played a key role advocating for policies and laws to support skills training for high-tech manufacturing jobs and private-sector job creation. She was also actively engaged in efforts to extend the Export-Import Bank, supporting U.S. companies as they compete and export products around the world, and she fought for smart tax reform that would make American companies more competitive.

“Kelly brings significant government experience to our board, which will be helpful for Caterpillar as we address a wide range of public policy issues,” said CEO Jim Umpleby.

Ayotte joins 13 other members on Caterpillar’s board of directors and will be a member of the Public Policy & Governance Committee of the board.

About Caterpillar
For more than 90 years, Caterpillar Inc. has been making sustainable progress possible and driving positive change on every continent. Customers turn to Caterpillar to help them develop infrastructure, energy and natural resource assets. With 2016 sales and revenues of $38.537 billion, Caterpillar is the world’s leading manufacturer of construction and mining equipment, diesel and natural gas engines, industrial gas turbines and diesel-electric locomotives. The company principally operates through its three product segments - Construction Industries, Resource Industries and Energy & Transportation - and also provides financing and related services through its Financial Products segment. For more information, visit caterpillar.com. To connect with us on social media, visit caterpillar.com/social-media. 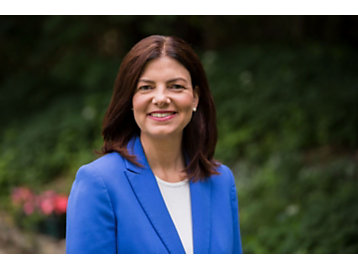