Starting Small to Create Something Big

It all started with a small team and grew into something big – the Cat® 416 Backhoe Loader.  In November 1985, Caterpillar introduced its new backhoe loader product line. The Cat 416 was the result of five years of intensive market and user studies. Thousands of hours of competitive product evaluations and close to 2,000 customer interviews were conducted to determine what people needed, but were missing, in existing backhoe loaders.

From the start, a team concept was used on the project, which emerged from an internal product strategy conference. A small group of five was selected and given direction to get Caterpillar into the backhoe loader business.  The original team members were Jim Bockhaus, Wes Leveck, Dean Rohweder, Jim Marx and Bob Humpidge.

In 1982, the project grew and employees from the U.S. and United Kingdom in Engineering, Manufacturing, Purchasing, Materials and Quality joined the team. By mid-1983, the first prototypes were running.  The team approach brought the new product to fruition in a much shorter time than usual.

While the development of the 416 was swift and cost efficient, the emphasis remained squarely on quality and improved technology.  Computer-aided design and finite element analysis played an important role in the creation of the backhoe loader.

Extensive laboratory and vehicle testing provided input to the designers so performance and durability goals could be met. The main frame, boom, stick and loader arms were laboratory tested under maximum stress conditions to ensure adequate structural life.

Originally, the 416 was introduced to more than 1,000 dealer principals at a Cat dealer meeting.  They were extremely enthusiastic about the prospects of selling this high demand product.

In 1985, the line was made reality in less than three and a half years after the first designs were put on paper. The machines rolled off the assembly line and into the hands of eager groups of customers.

By 1986, additional models, including versions specially designed for Europe, were introduced.

Today, when you see a Cat backhoe loader on the job, just remember that many good things start small.

Members of the project team strike a pose by the product of their hard work - the Cat® 416 Backhoe Loader. 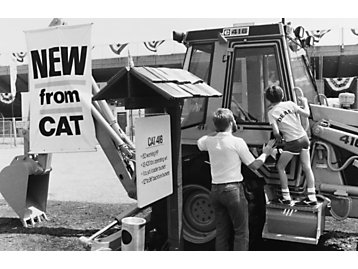 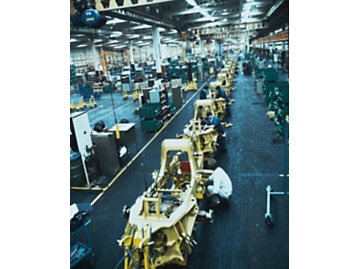 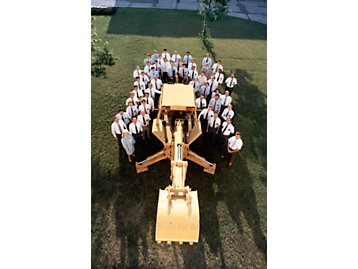