Diggin’ Into History – The Search for a Milestone Caterpillar Machine

On November 6, 1936, the 20,000th Caterpillar diesel tractor rolled off the assembly line in East Peoria, Illinois. The model was a Caterpillar RD4 – today called a Cat D4. Central Illinois farmer Chuck Ehler was a young boy then, and it was his Uncle John who bought the milestone machine – one that he later sold and never saw again. In this edition of Caterpillar’s Diggin’ Into History, hosts Rusty Dunn and Lee Fosburgh head to Chuck’s farm to learn the incredible story of his family’s efforts to find and restore that original dozer, and return it to its original owners. 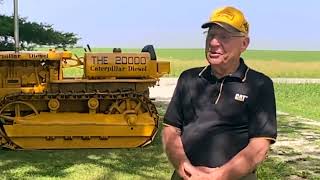