Building one of the Earliest Superhighways

In 1938 construction started on a $61,000,000 high-speed, divided four-lane concrete highway that would connect Harrisburg, Pittsburgh, and Philadelphia, Pennsylvania. Today, the cost of this highway would be a staggering $1,044,303,055!

Named the Pennsylvania Turnpike, it was the first limited-access superhighway in the world.  The highway was a new experiment in toll roads for through traffic—there were no grade crossings throughout its entire length, and local traffic was barred.

The construction on the route cut through the Allegheny mountains and included 8 miles of tunnels that eliminated miles of dangerous mountain driving by reducing the maximum grade to 3 percent. Work on the project included 172 Cat® dozers, 17 motor graders, 2 elevating graders, and 23 generator sets.

Opened to traffic in 1940, the Turnpike was originally 160 miles long and now spans more than 550 miles. Another interesting fact is that the road originally did not have a speed limit! Due to its success, it provided the “road map” (pun fully intended) for many other toll roads that were eventually built across the U.S. 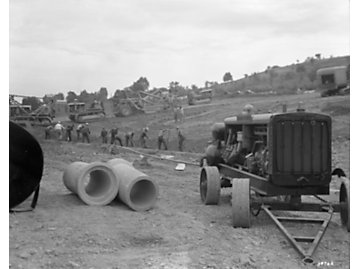 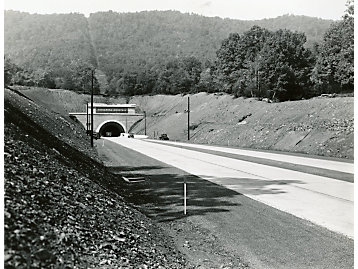