In 1931 we introduced the first diesel engine to power our line of earthmoving products. These engines were almost immediately pressed into service by over 20 different manufacturers (other than Caterpillar) who used them to power shovels, compressors, and other types of machinery.

In 1935 we took advantage of a growing market and introduced the first diesel engine designed specifically for non-tractor applications. Named the Caterpillar D17000, the engine powered all different types of machines in the rail, oil, and marine industries. In 1936 the Caterpillar diesel engine hit a major milestone when the 17,000th unit rolled off the assembly line at the East Peoria plant. How ironic that the engine just happened to be a D17000.

Long time Cat customer, the Delta Drilling Co. of Evansville, Indiana, powered its rotary drill rigs with D17000 engines. Delta Driller D.S. Bryant described his engines by saying, "The most dependable, most satisfactory engines we ever used. Our repair costs are very light." Drilling in soft lime, Delta was able to bore 1,900 feet in four days. In addition to the drilling, Delta’s Cat® engines also powered a Gardner-Denver mud pump.

In the American South, cotton ginning time was a busy one, and if profits were to be made it was no time for power failures, or worse, for time-consuming repairs and adjustments. The D17000 immediately became a favorite throughout the entire cotton belt. Cat customers, such as the Farmers Gin Co. of Crawfordsville, Arkansas, raved about how their D17000 engines were capable of working throughout the entire ginning season with a minimum of time offline.

Customer SanGravl Co. Inc. operated towboats on the Tennessee River near Johnsville, Tennessee. They installed Cat D17000 engines to power their towboats, the Blanche and the Joe Belk.  For the first time in company history, the power of the D17000 gave them true all-season performance.

The Heldenfels Bros. Co. of Corpus Christi, Texas used two D17000 engines to do rugged dredging jobs. One of their favorite engines was a 40,000-hour veteran D17000 that ran one of their dredge’s pumps.  Dredge captain L.W. Hunt said, "We've had Cats a long time and we're still buying new ones."

The Cat D17000 engine was the first engine to power a 44-ton diesel electric locomotive. Although less "glamorous" than the sleek passenger streamliners or the mighty freight-hauling behemoths, the 44-ton Diesel-electric locomotive established itself as an important component of any forward-looking plan of railway progress in the 1940s and 1950s. To yard and branch line operations it contributed the substantial advantages of lower fuel costs, cheaper maintenance, and higher availability.

The D17000 really did it all, and it was so successful that it remained a staple of our product line for over 20 years. Today, that is what we would call “Built for It.”  Read more stories from our historical collection at caterpillar.com/history. 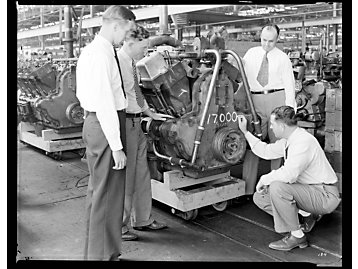