During the global pandemic, youth jobs around the world — often the first to go and the last to come back — are under threat. But a new generation of digital natives, if properly trained in growing fields, could offer a solution.

The jobs statistics are staggering: as of April 21, more than one in five Americans had filed for unemployment since the beginning of the Covid-19 pandemic. By the end of the summer, that could be as high as one in four.

For technical workers in STEM fields, the public health crisis threatens to make a bad situation — where many high-skilled positions were going unfilled even before the pandemic — worse. By 2025, the jobs need in STEM fields in the US could be as high as 3.5 million, but the capacity to fill those jobs is direly short — mostly for the lack of sufficient skills training programs.

Out of tragedy and need comes possibility, however. For young people especially, the opportunity to make career choices in the STEM field, as well as retrain and upskill into new positions could be one of them . 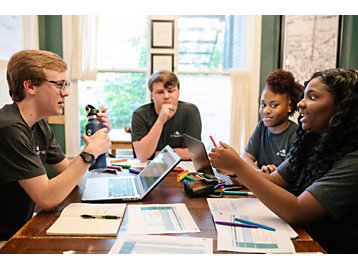 The challenges — at the moment — are stark.

As the global economy has plummeted, it’s young people who are typically the first to lose employment and the last to gain it back, according to Peter Shiras, Executive Vice President at the International Youth Foundation (IYF), which is one of the organizations addressing the issue of chronic unemployment and under-employment for young people around the world.

“We anticipate this having a disproportionate impact on low-income, economically marginalized young people,” Shiras said.

Young people are more likely to work in retail, hospitality, and food service jobs that are vulnerable to economic shocks. They’re also less likely to have access to healthcare and more likely to work in the informal economy. This trifecta could prove cataclysmic for a new generation graduating high school, trade school and college when seeking gainful employment, he said.

Research out of the University of Cambridge, based on US and UK labor statistics, has already confirmed this phenomenon. The ILO has warned that young people “are more vulnerable to falling labor demand.”

The 2008 financial crisis offers a dire case study. Between 2008 and 2009, 22 million people around the world lost their jobs, including a higher proportion of young people. The ILO predicted that as many as 25 million jobs could be lost due to the Covid-19 pandemic.

“When you look at this globally in many low- and middle-income countries, the majority of young people are not even in the employment numbers,” he said. “Those people in the informal economy will be very severely affected by this.”

Rising to the opportunity

Despite the gloom and doom statistics, there are signs of hope. International Youth Foundation is one of the organizations working to ensure that young people are not left behind in the wake of the pandemic.

For the past 30 years, IYF has been developing and implementing programs that build leadership, technical and life skills for young people, helping them enter the workforce and become change agents in their communities. For this reason, the Caterpillar Foundation has supported IYF for the past 13 years, and together, the two organizations were able to reach thousands of young people in 14 countries with skills-based programming that prepares them for productive livelihoods and fulfilling adult lives.

This May, in response to the COVID-19 crisis, IYF announced the creation of the Global Youth Resiliency Fund aimed at supporting young entrepreneurs around the world who are leading both social enterprises and nonprofits to deliver vital work in response to the pandemic. The organization has collected a number of stories about youth rising worldwide to the challenge posed by the public health crisis: one example includes how an organization in India is supporting parents become teachers during COVID-19; and another includes how one small business has pivoted from making shoes to masks.

In addition to responding to the current crisis, IYF is also looking at the changing landscape of education and has recently launched an online version of their acclaimed life skills training program Passport to Success, known as PTS Traveler. Young people learn key work readiness soft skills through a free, interactive, game-based learning program, right on their mobile phones.

“As we move toward a recovery period, we’ll see a combination of blended learning approaches where you can combine in-person and online training and a real premium placed on digital skills and digital fluency,” Shiras said.

For Susan Reichle, the President & CEO of IYF who spoke at a panel on “Re-Imagining Youth Economic Opportunity in a Post COVID-19 World” last month, young people are also particularly poised to excel and lead in this new digital world.