A Nostalgic Look at Caterpillar People Circa 1954

"Fifty Years on Tracks" is a marvelous time-worn book published in 1954 by the Caterpillar Tractor Company. It chronicles the story of how the C. L. Best Tractor Co. and the Holt Manufacturing Company merged to become the Caterpillar Tractor Co. It’s a story many of us know well.  But likely not many know of the Caterpillar customers and employees who come to life on the book’s yellowed pages. Written as a memento marking Caterpillar’s first 50 years, the words tell a story of innovation, hard work, determination – and even connectedness that somehow still tugs at the heart some 63 years later. This is the second in a series of articles retelling the charming stories found therein.

The passing of time often brings change. But, one thing hasn’t changed since the publication of Fifty Years on Tracks – the value our company places on our people. A charming narrative highlights Jack Trowbridge, a machinist who began working at the San Leandro, California plant in 1942. When the war came, Trowbridge was called to serve with the allied forces in Europe. Upon his return to the States in 1946, Trowbridge once again became a Caterpillar employee, and was admitted to a two-year production specialist course.

“A journeyman machinist, he [Trowbridge] usually puts in 40 hours a week. From his pay check, the Company deducts $5.60 each month for $8,000 group life insurance plus weekly disability and accidental death and dismemberment benefits . . . another $7.94 each month for Blue Cross . . . and $9.41 for contributory retirement benefits. Enrollment in each of the plans is voluntary; the Company currently contributes about $8 million yearly to pension and group insurance plans.

With two girls and a boy – all under 10 – Trowbridge’s monthly budget adds up to $288.04. Groceries ($100) and house payments ($62.54) are the largest items. The family’s principal savings are invested in U.S. bonds. Jack also maintains a checking account and saves money in the Caterpillar Credit Union. Among his objectives, security and advancement rate high.

Trowbridge is president of the plant bowling league, attends Trinity Episcopal Church with his family and budgets $6 each month for shoes.”

Today, Caterpillar is committed to providing employees with meaningful work in an empowering, inspiring environment. And just like back in 1952, Caterpillar people can continue to grow and develop over their career, working and learning side-by-side with some of our industry’s best. 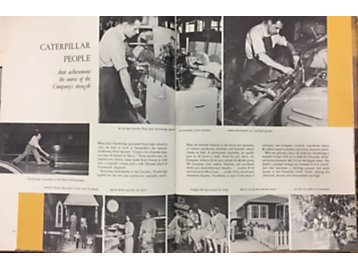