"Fifty Years on Tracks" is a marvelous time-worn book published in 1954 by the Caterpillar Tractor Company. It chronicles the story of how the C. L. Best Tractor Co. and the Holt Manufacturing Company merged to become the Caterpillar Tractor Co. It’s a story many of us know well.  But likely not many know of the Caterpillar customers and employees who come to life on the book’s yellowed pages. Written as a memento marking Caterpillar’s first 50 years, the words tell a story of innovation, hard work, determination – and even connectedness that somehow still tugs at the heart some 63 years later. This is the first in a series of articles retelling the charming stories found therein.

Twenty-one-year-old Charles Holt left his home in New Hampshire in 1863 to settle in San Francisco. There he started working at a lumber company – and just three short years later opened  his own lumber company, harvesting wood principally from his father’s New Hampshire mill. But it turned out that wood from the East – often made into wagon axels and wheels – didn’t receive proper seasoning for the hot, dry western climate. So Charles decided to manufacture wagon wheels and other wagon parts a bit inland in Stockton, California. Charles’ brother, Benjamin, soon after headed west to join in the new venture.

On a destined and parallel path, Daniel Best was eager to make his fortune. At age 21 in 1859 he traveled the Northwest trying his hand at gold mining, hunting and sawmilling without much success. But in 1869, Daniel started working at his brother’s ranch near Marysville, California. Back then, the Best brothers hauled grain from the fields into town for cleaning, but it was an expensive proposition. In the following winter, Daniel invented three portable grain cleaners to clean the grain right at the farm – eliminating a major expense. The following harvest, the Best brothers operated all three machines, and they soon opened a local factory to manufacture and sell the machines.  In 1891, Best even brought his 13 year old son, Clarence Leo (C.L.), into the family business.

Years passed, and the Best and Holt companies each grew creating impressive new lines of farm equipment and other types of machinery with principal concentration on tractors and harvesters. At first, they produced steam-powered machines with large wheels. Later, Benjamin Holt added tracks to his machines, and became the first to invent a commercially successful track-type tractor. His tractors were first powered by steam then later by gasoline engines. The competitive spirit of those early companies no doubt fueled innovation, even back then.

By the end of World War I, in 1918, both companies were keenly competitive, each with its own advantages. Best had a better financial status, a more advanced tractor design and the makings of a solid dealer group. Holt, however, had a worldwide reputation, the “Caterpillar” trademark, larger factories and a combined harvester line that had been around for 40 years. Blending the best of both worlds, in 1925, the two companies merged.

And the Caterpillar Tractor Co. was born! 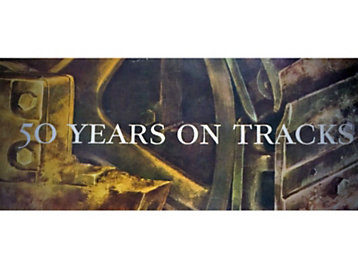