The Story of "Big Muskie"

In 1966, an exciting project started at the factories of the Bucyrus Erie Co. – the engineering and building of the components of what would be one of the world’s largest earthmoving machines ever built, “Big Muskie.” Central Ohio Coal Co. had chosen this immense machine because the mine property extended over 110,000 acres of hilly terrain and made the use of a dragline versus a shovel to be more profitable at the levels of earth the coal was located in. It also allowed the coal company to better carryout their reclamation plans.

The machine was so large it was necessary to ship the components to the coal mining customer in Ohio and erect the machine on site. It took 340 rail cars and 260 trucks to ship all of the components and 200,000 man hours to construct, but the machine finally went into production in 1969.

In 1976, “Big Muskie” removed 8,000 yards of overburden for the coal company per operating hour. In its 22 years of service, it removed twice the amount of earth moved during the original construction of the Panama Canal.

Shut down in 1991, “Big Muskie” was finally dismantled for scrap in 1999. The only component saved was the bucket, which was later incorporated into a display about the machine and surface mining and reclamation in Miners Memorial Park in McConnelsville, Ohio. 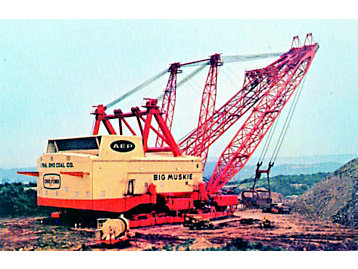