An abandoned mine, a rare treasure and a rescue

By dusting off old advertisements, you’ll find the Best 25 Tracklayer was capable of “doing the work of 12 horses and three men.”

Nowhere did it mention anything about how the 5,200 pound tracklayer could go airborne, but that’s exactly what the Best 25 recently did.

The story begins last December with a hiker in Southern California who stumbled upon an abandoned mine and a seemingly insignificant old tractor.

That’s not what Caterpillar customer and antique machine enthusiast Matt Veerkamp saw after coming across pictures of the hiker’s find online.

“From the first picture I saw I knew instantly what it was and how rare it was,” Veerkamp said. “Love at first sight kind of thing.”

The old tractor was a Best 25 – one of only a few left in existence.

Veerkamp feverishly began the process of trying to determine the exact location using Google Earth, and found the tracklayer resided on the Mountains Conservancy and Recreation Authority. From there, he developed a detailed plan of removing the tractor that wouldn’t disturb the land, and it only took a few short weeks to get approval from the conservancy to remove the tractor.

In early January, Veerkamp and fellow Caterpillar enthusiast Shawn Stover made the steep 1,100-foot ascent into the Simi Valley hills. The prize was the abandoned Best 25 that was discovered only weeks earlier.

The work to remove the tractor from the abandoned mine was just beginning.

Veerkamp and Stover removed the engine and rear mounted belt pulley from the rest of the tractor to make it easier to lift off the mountain. The tractor had been set up with the belt pulley to power one of the rock crushers for the abandoned mine and consequently the tractor had very minimal wear on the undercarriage and tracks. Many parts to the tractor were missing, but some were found nearby.

Four weeks of intense planning came down to a crucial five minutes. The next day, Veerkamp’s team went back up the mountain to airlift the Best 25 by helicopter. The tractor and engine were rigged up and lifted off the mountain with a transport vehicle waiting below. The Best 25 was on its way back to civilization – and an overhaul.

Eight months later, the Best 25 was ready to be showed off to Caterpillar enthusiasts at the Antique Caterpillar Machinery Owners Club national machine show in Tremonton, Utah. A small crowd gathered around a semi containing four antique tractors from the Veerkamp’s collection – a Best 60 Tracklayer, a Holt 2-Ton, a Caterpillar Twenty Tractor – and the now famous Best 25 Tracklayer.

As the first tractors were unloaded, the crowd grew larger and the excitement continued to build.  The little Best 25 started with just a few gentle hand pulls on the flywheel and she chugged down the semi ramp onto the ground. Throughout the weekend, the Best 25 was the center of attention.

That’s a far cry from a few months earlier when the Best 25 was an abandoned treasure, waiting patiently for its next job. 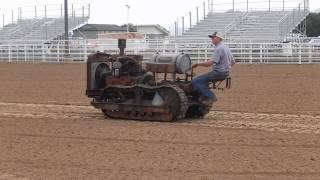