In 1870, Daniel Best went to work at his brother Henry’s ranch in California. There, Best had the opportunity to apply his skills as an innovator to the large western grain growers market. One year later, he earned a patent for a portable grain cleaner developed at the ranch.

Best introduced his first combine harvester that added the process of harvesting, cleaning, and bagging into one unit in 1885. The next year, he moved to a larger manufacturing plant in San Leandro, California, which he named Daniel Best Agricultural Works (In 1893, it incorporated as the Best Manufacturing Company).

Best steamers were more popular than competitors because of their powerful engines. Best steamers were very innovative, with an up right boiler, a single front wheel and weighed 11-tons. Later models included a 50-horespower traction engine in 1889 and a 110-horespower model in 1897. Steam traction engines worked well on dry and stable ground. However, the drawback was they did not work well in peat or other soft soils – this would eventually lead to the development of steam traction track-type tractors. 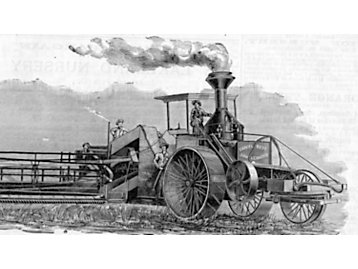