While Caterpillar customers in 1918 saw a flu pandemic hit nations around the globe, they also witnessed the new track-type tractor doing incredible work at a whole new speed. Check out this story from our predecessor company magazine* and see how a Mr. Fanoe made sure the job got done, just like our customers do today.

Mr. Fanoe of Salinas, California, gave a satisfied-customer testimonial regarding the purchase of a new Holt Caterpillar 45 track-type tractor. According to the publication, Fanoe maintained that his new tractor could do the same amount of work that it would take 22 horses, resulting in substantial savings.

Fanoe figured that it cost $3,726 to keep 22 horses versus $2,550 for maintaining the tractor for the same time period, for a savings of $1,176 – roughly equivalent to $22,000 in today’s dollars. Fanoe pointed out that horses need rest, but using tractors enabled him to farm from daylight to dark, stopping only at noontime to eat lunch and attend to tractor maintenance.

The machinery was critical to Fanoe’s ability to get his crops in on time that year – a season when planting started late. With the money saved by using his new Holt machine, Fanoe purchased more acreage, increasing the family farm beyond the 500 acres he already owned.

Today, the Fanoe Ranch is still a working family farm located near Salinas, supplying the world’s dinner tables with more than a million servings of vegetables per week.

*The Holt Times was a customer magazine published and distributed by Holt Tractor Co., a predecessor company of Caterpillar.

Although everyone experiencing the uncertainty and cruel repercussions of the current COVID-19 pandemic is navigating seemingly uncharted territory, our civilization has been here before. Aside from a few notable flu outbreaks still in memory – the most recent being the “mild” 2009 flu pandemic that resulted in under a million deaths – you have to turn the history book pages back to 1918 to find an illness that raced as hungrily through cities, counties and countries like the one we’re experiencing now.

There isn’t universal agreement on how the 1918 Flu Pandemic – also known as the Spanish Flu – started, but it likely did NOT start in Spain. Nonetheless, it quickly spread worldwide, facilitated by troop movements of World War I. No matter the origin, three waves of the illness rippled relentlessly throughout the world from early March 1918 – toward the end of World War I – until subsiding in the summer of 1919. It’s estimated that one-third of the world’s population was infected with the virus, resulting in as many as 50 million or more deaths worldwide and is thought to be the most lethal pandemic in history.

The 1918 Flu Pandemic began a few years before Caterpillar was founded in 1925, and both predecessor companies, Holt and Best, were located in California’s San Francisco Bay area during the outbreak.

During World War I – both prior to and during the flu outbreak – the Holt and Best companies aided war efforts by manufacturing equipment that furnished power to raise crops, feeding workers in the United States, soldiers in France, and people throughout the rest of the Allied nations.

Additionally, the Holt Caterpillar track-type tractor was key in the war effort itself, providing important transportation work on the battlefront.

The Opportunity to Help.

The pandemic erupted during a time of transition from horse-drawn farming to machine-powered techniques that enabled farm work be done faster and cheaper than ever before. It was important timing, too, because hired-hand labor was scarce due to both the war and sickness.

This undoubtedly increased the importance of machine-driven farming and the role that the track-type tractor played. Not only could machinery work faster and longer than horses, resulting in increased productivity at lower costs, but fewer farm hands were needed at a time when they were difficult to come by.

Then as now, many governments and health officials tried to slow the spread of infection by issuing city or local isolation and quarantine guidelines, recommending good personal hygiene and use of disinfectants, and by limiting public gatherings. In 1919, the Spokane, Washington, Caterpillar School – where dealers were trained to sell, operate and service Holt Caterpillar equipment – was canceled.

The Holt Caterpillar track-type tractor was deemed by the U.S. government as essential to the war effort, and employees in Holt’s Stockton, California, foundry considered it their “patriotic responsibility” to keep the assembly line running, but many took care by wearing face masks during their shifts.

We’ve Been Here Before.

Throughout our 95-year history, Caterpillar has faced and overcome challenges that are now woven into our rich history – just as is the 1918 Flu Pandemic. What we’re facing today as a company and a global community will one day be a story told in the past tense of how our people rallied to do just what was needed when it was needed.

Holt Ten Ton track-type tractor working with horses while grading a road in California, circa 1920.

Holt employees outside the Stockton, California, plant in 1918.

Holt tractors were replacing horses in agricultural applications throughout the early nineteenth century. 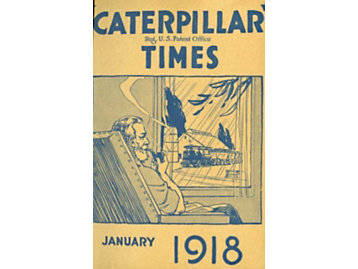 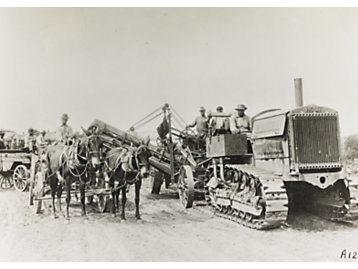 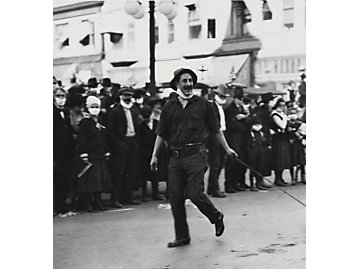 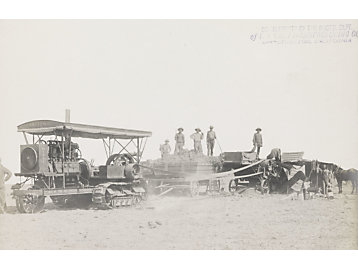