To the local dealer and their employees, it was apparent the Cat D9 could sizably outproduce its main competition, but it was necessary to prove the difference in the field to contractors looking for machines for their Kobe Bay project.

The Cat dealer made arrangements with the contractor for an on-the-job competitive demonstration. Flagpoles marked the boundaries of the test area where dozing and ripping production was to be calculated.

The job site consisted mostly of weathered granite and powdered granite chips, and thin layers of granite, much like panes of glass, required ripping before dozing could be accomplished.

Dozing tests were conducted for one-hour production periods. Analysis of the tests revealed the competition produced 223 cubic yards while the D9 produced 510 cubic yards – more than twice the total production of the competitive machine. Faster reverse speeds of the D9 had given a 20-second-per-cycle advantage.

Ripping tests were set up on the same location. The D9 with ripper successfully produced 293 cubic yards per hour. The earth was so tough and hard that the competitors’ ripper shanks became red-hot in 10 to 15 minutes of operation, forcing them to be dismantled. The earth condition was not a rock base; yet, it was hard enough to reject the other machines’ ripper teeth.

Seven Cat D9s and D8s, each equipped with dozers and rippers, along with two 463 Scrapers, removed a 140-acre slice of the mountain. The 19.5 million cubic yard job is still one of the largest earthmoving operations that has occurred in Japan. Completed in 1966, it reclaimed a valuable portion of the Kobe Bay and established a new residential and industrial area. 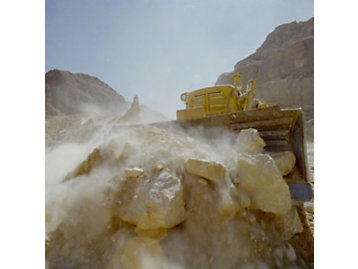