Caterpillar has been a key partner in India’s growth since the first sales of a Caterpillar track-type tractor in 1914, supporting growth in agriculture, mining, transportation, captive power generation and construction of infrastructure. Today, Caterpillar and its dealers collectively employ more than 11,000+ people in India, representing nearly every part of Caterpillar’s business.

Beginning of a Dealer Network

In March of 1926, Fitton Smith & Co., Ltd., of London, became the first Caterpillar dealer to export to India. By the early 1930s, equipment was first sold in country by Caterpillar export dealer William Jacks & Co., in Mumbai. Today, Gmmco Cat® is the dealer that covers South, West and Central India while Gainwell Cat operates in North, East and Northeastern India.

In 1948, construction started on the Bhakra Dam – at that time the largest concrete gravity dam in the world. Located on the Sutlej River in Bilaspur, Himachal Pradesh in northern India, the dam forms the Gobind Sagar reservoir. From the early days of its construction, Cat® equipment was there.

Cat dozers were first purchased for the job in 1948. By 1953, eleven Cat D8800 electric sets became part of the jobsite. They powered pull bucket cars loaded with concrete up a mountain side and over two tresses 300 feet high. More than five million cubic yards of concrete was hauled and dumped into the forms.

In 1959 alone, the Punjab Government Irrigation Branch of India purchased vast numbers of Cat No. 12 Motor Graders. The reason given for its purchase was that the graders maintained haul roads 24 hours a day on the Bhakra Dam project. Quality of manufacture allowed this machine to work around the clock.

In the end Caterpillar supplied over 100 pieces of equipment, which comprised about a third of the equipment used on project. Competed in 1963, the dam benefited over 10 million people by feeding water into 200 miles of irrigation canals.

Today, our presence in India includes state-of-the art manufacturing facilities, research and development centers, service and support organizations. As in the past, our employees produce world-class products for India and export Indian-made-products to other countries with a focus on sustainability and exceptional productivity. 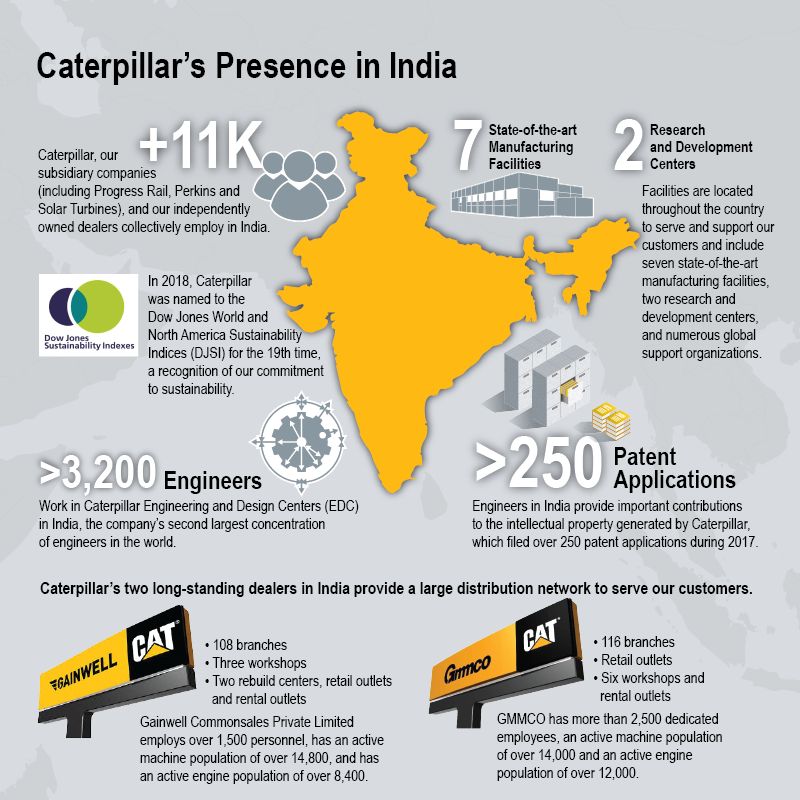 Learn more about our Caterpillar locations in India including our manufacturing facilities in Hosur and Thiruvallur.