Google the phrase “China water scarcity” and you’ll be hit with a number of alarming statistics:

A nation with 20% of the world’s population has just 7% of the globe’s freshwater resources. About 80% of that freshwater is found in the South, yet it’s the North that’s home to 40% of the population and 60% of agricultural land. And freshwater availability in northern China averages just 300 cubic meters per person per year, well below the World Bank’s water poverty mark of 1,000.

All that makes it imperative that businesses in northern China commit to water conservation — and our facility in Tianjin is helping lead the way.

After the government released a set of water-saving regulations, Caterpillar Tianjin employees responded by establishing a water-saving team and implementing water management strategies.  The team introduced recycled and filtered pump-flushed water, which saves 50 tons of water every year. Water-saving appliances in the lavatories further reduced water usage another 13 percent. Additionally, using recycled water for grass irrigation and lavatory usage, the consumption of fresh water has been reduced more than 13,700 tons per year. 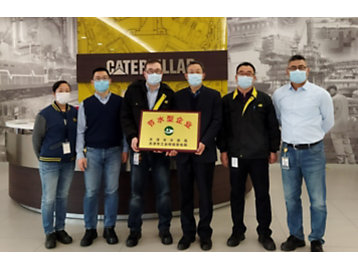 Caterpillar Tianjin’s efforts support one of our seven enterprise sustainability goals — specifically, to implement water management strategies at 100% of facilities located in water high-risk areas by 2030.

At all these locations, we’re exploring ways to conserve and reuse water. And we’re challenging ourselves to be more efficient, so it requires less water to manufacture our products and run our operations.

Our team in Tianjin is focused on more than just water conservation. From taking steps to proactively reduce emergency emissions, to protecting the environment and reducing consumption, the government also named the facility as one of 19 Environmental Protection Leaders for its efforts to support environmental protection and sustainable development.

For more details on our 2030 water goal, check out this short video. You can find additional information about all our sustainability goals here.