“Economic weakness throughout much of the world persists and, as a result, most of our end markets remain challenged.  In North America, the market has an abundance of used construction equipment, rail customers have a substantial number of idle locomotives, and around the world there are a significant number of idle mining trucks,” said Caterpillar Chairman and Chief Executive Officer Doug Oberhelman.  “However, there were a few bright spots this quarter.  Both the construction industry and our machine market position improved in China.  Most commodity prices, while low, seem to have stabilized.  Parts sales have increased sequentially in each of the last two quarters.  Our machine market position and quality remain at high levels and our work on Lean and restructuring are continuing to help us lower costs.

“I’m pleased with how Caterpillar has responded and our team’s incredible focus on reducing costs and pulling through profit despite sluggish end markets.  In the third quarter, despite a $1.8 billion decline in sales and revenues, our operating profit pull through was significantly better than our target range.  Lower variable manufacturing costs of $234 million and lower period costs of $420 million enabled us to offset much of the negative impact from a weak sales environment and continue investment in products and digital capabilities,” said Oberhelman. 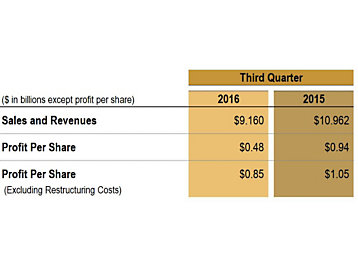 The full-year outlook for 2016 sales and revenues is about $39 billion, and profit is $2.35 per share, or $3.25 per share excluding restructuring costs.  The outlook does not include potential mark-to-market gains or losses related to pension and OPEB plans, which, as discussed in Q&A #10, are likely to significantly impact full-year 2016 results.  The previous outlook for 2016 expected sales and revenues to be in a range of $40.0 to $40.5 billion, with profit at the midpoint of the sales and revenues range of about $2.75 per share, or about $3.55 per share excluding restructuring costs.  Restructuring costs in 2016, which were expected to be about $700 million, are now forecast to be about $800 million, primarily due to asset write downs recognized in the third quarter.

Preliminary Outlook for 2017 Sales and Revenues

Our preliminary outlook for 2017 is that sales and revenues will not be significantly different than 2016.  The balance of risk, particularly during the first half of the year, is likely on the negative side.  We are, however, encouraged that most commodity prices important to our business have improved from the lows earlier in 2016.  Should commodity prices show relative stability and move higher in 2017, it is reasonable to expect that our business would respond, and we could see a more positive second half.  Our preliminary outlook for 2017 is based on our expectation that world economic growth will remain subdued at close to 2.5 percent – similar to the past few years.

“While we are seeing early signals of improvement in some areas, we continue to face a number of challenges.  We remain cautious as we look ahead to 2017, but are hopeful as the year unfolds we will begin to see more positive momentum.  Whether or not that happens, we are continuing to prepare for a better future.  In addition to substantial restructuring and significant cost reduction actions, we've kept our focus on customers and on the future by continuing to invest in our digital capabilities, connecting assets and jobsites and developing the next generation of more productive and efficient products,” said Oberhelman.

Following is a summary of positive and negative factors that could influence 2017 sales and revenues:

“As you know, I’ve decided to retire after 41 years at Caterpillar, and Jim Umpleby will succeed me as CEO.  He’s been a key part of the leadership team for several years and is absolutely ready to lead Caterpillar.  I’m confident I’m turning over a company that’s ready for a better future.  We have a great team, our product portfolio is the best ever, our machine market position and quality remain at high levels and we’ve significantly improved our cost structure.  At some point, and I think we’re getting closer to that point, our businesses will turn up.  Many of our businesses, including mining, oil and gas, rail and construction, are currently operating well below historical replacement demand levels in many parts of the world.  It’s a good time for Jim to take over as I know Caterpillar will deliver even better financial results when key industries begin to improve and get back to mid-cycle replacement demand levels," said Oberhelman.

About Caterpillar:
For 91 years, Caterpillar Inc. has been making sustainable progress possible and driving positive change on every continent.  Customers turn to Caterpillar to help them develop infrastructure, energy and natural resource assets.  With 2015 sales and revenues of $47.011 billion, Caterpillar is the world’s leading manufacturer of construction and mining equipment, diesel and natural gas engines, industrial gas turbines and diesel-electric locomotives.  The company principally operates through its three product segments - Construction Industries, Resource Industries and Energy & Transportation - and also provides financing and related services through its Financial Products segment.  For more information, visit caterpillar.com.  To connect with us on social media, visit caterpillar.com/social-media.