When an African Emperor is Your Customer

Haile Selassie was Ethiopia's regent from 1916 to 1930, and emperor from 1930 to 1974. Selassie will always be remembered for his internationalist views, which led to Ethiopia becoming a charter member of the League of Nations. And besides being an internationally-known leader, he was a Caterpillar customer as well!

In 1932 the Emperor took a personal interest in the progress of what would become Ethiopia’s longest road. Accompanied by his two sons, Selassie visited the town of Wolisso, which is 110 kilometers from Addis Ababa. There they viewed the construction work on the Jhimma Road. Seen in this colorized photo, his Majesty (1st from the bank) and his son the crown prince are watching the work of a Caterpillar Thirty tractor and grader. Prince Luel Makannen is driving the Caterpillar Thirty.

The Emperor of Ethiopia with his two sons and a Caterpillar Thirty tractor. 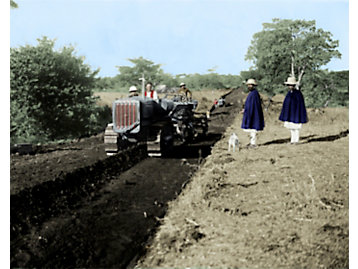