Anniversary of the Caterpillar Trademark

On August 2, 1910 Benjamin Holt, founder of one of Caterpillar’s parent companies – the Holt Manufacturing Company – registered a trademark for track-type tractors and combine harvesters with the U. S. Patent Office for his company's exclusive use. The trademark was "Caterpillar."

In the registration, Holt said he had used the trademark in his business since 1904. The name Caterpillar was originally coined by Holt photographer Samuel Clements when he saw Holt’s machine for the first time. Clements said the machine looked like a “giant caterpillar.” Some say Holt did not originally like the name, but persuaded by his family, he came to believe there was value in it.

During the years following the adoption of the "Caterpillar" trademark, Mr. Holt's company used that trademark as the distinctive name for the products they manufactured, and the trademark "Caterpillar" became widely known as products made only by The Holt Manufacturing Company. The company even made a marketing slogan around its name: “There is Only One Caterpillar and Holt Builds It.”

In 1925, when the Holt Manufacturing Company and the C. L. Best Tractor Co. merged, they chose the name "Caterpillar Tractor Co." as their corporate name and designated the entire line of heavy-duty machines and parts they produced as Caterpillar products. The Caterpillar trademark was so well known known that C.L. Best, Caterpillar’s first Chairman, said the merger would have never happened without the name.

In 1986 the name Caterpillar Tractor Co. changed to Caterpillar Inc. in order to more accurately reflect the enterprise’s growing diversity in products and services. Today, after 116 years of continuous use, the trademark "Caterpillar" is registered with the U.S. Patent Office along with its companion mark "Cat." In addition, these marks are used and registered as trademarks in all the principal countries of the world, where the names "Caterpillar" and "Cat" have become synonymous with quality and service in the field of heavy-duty machinery.

Benjamin Holt is credited with inventing the first commercially successful track-type tractor in 1904. 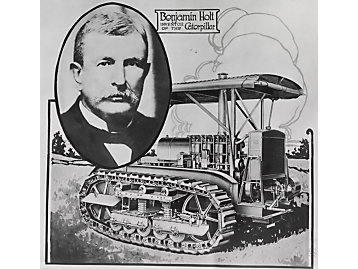 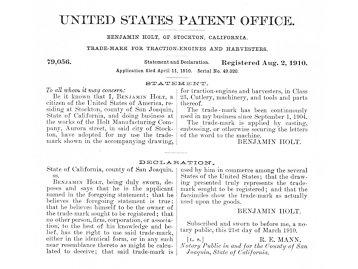 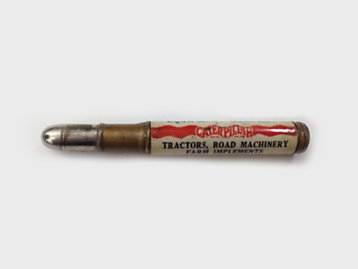 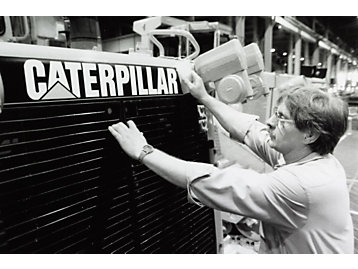