The Mystery of What’s in a Name

In October of 1931, Caterpillar began production of the world’s first diesel-powered tractor—the Diesel Sixty. By early 1933, Caterpillar diesel production was growing at a frantic pace thanks to this revolutionary machine. It was during this year that Caterpillar’s production of diesel horsepower exceeded that of the entire United States in the previous year.

With an entirely new engine dominating the product line, it soon became apparent that the practice of naming tractors by horsepower—such as Diesel Sixty, Diesel Seventy, etc.—was too limiting. When the horsepower of the diesel product line was upgraded in 1935, Caterpillar rechristened the models as the “RD Series”: the RD4, RD6, RD7 and RD8.

There has been much debate about what RD stood for. It’s possible it stood for “Rudolf Diesel”, the inventor of the diesel engine. That could be true, but aside from the basic engine concept, the connection between Rudolf Diesel and Caterpillar is almost nonexistent. Others say RD stood for “Roosevelt Diesel”—paying homage to the architect of the New Deal, which was funding aggressive road expansion across America. This second theory seems even less likely, given that Caterpillar leaders at the time were not strong supporters of Franklin Roosevelt.

A more compelling argument for what RD truly represented is based on the location where Caterpillar tractors were manufactured. For inspiration, the designers and builders of these early diesel machines may have looked no further than the rural countryside surrounding the greater Peoria area.

Technological advances in road construction created a surge of road building in America during the 1920s and 1930s. Suddenly, rural areas were no longer isolated from the urban centers of the country. A new network of roads brought these once-separate groups together, but those roads demanded constant maintenance and upkeep. In the summer they needed repair and rebuilding. In the winter, snow plowing was needed to keep them passable.

To support and maintain these roads, the State of Illinois created a system of road districts throughout the state. Rather than referring to these districts as “Road District 1” or “Road District 2”, their titles were often abbreviated as “RD 1, RD 2, etc.” And what machines maintained these roads? The answer, of course, is Caterpillar RD Series tractors. Did Caterpillar’s designers take some inspiration from Illinois’ road system? The similarity between the names is certainly an interesting coincidence.

Regardless of the designers’ inspiration, the RD name became obsolete two years later when it was shortened to Caterpillar’s current “D” nomenclature. RD6s, RD7s, and RD8s, became the D6s, D7s, and D8s people recognize today. The name change and loss of institutional memory has left a mystery that may never be solved. But what we do know is those early Cat machines helped position Caterpillar as the nation’s road builder, creating and maintaining roads that are still used today. 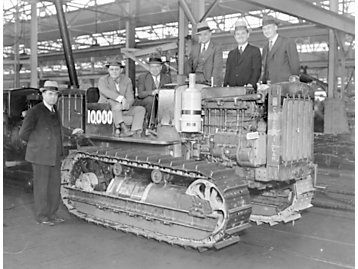 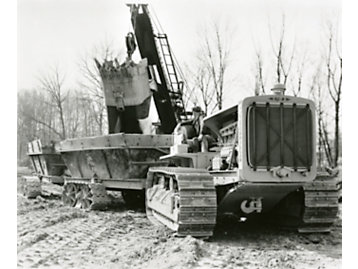 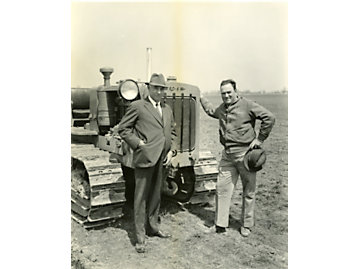