The Cat® No. 12: The Origins of the Modern Motor Grader

During the height of the Great Depression Caterpillar continued developing cutting-edge new products. In July 1938, our road machinery division launched a new machine called the Caterpillar Diesel No. 12 Auto Patrol – part of the product line known today as motor graders. The Diesel No. 12 went on to be the most recognized, longest running machine on the Cat® Motor Grader product line.

What Made It Special

In 1938 the Caterpillar Diesel No.12 was successfully demonstrated to an enthusiastic group of Cat dealers in Peoria, Illinois. Its design was unique and is the origin of the modern motor graders we see today. But in addition to being stylish, the No. 12 was also a heavy-duty, self-propelled road grader designed for efficient and economical road building and maintenance work.

The No. 12 had a range of useful blade positions, surpassing all competitors of its time. In addition to high and low bank-cutting positions, the blade could be turned completely around, facing backwards, which meant an operator could continue to do work while driving in reverse. This feature was valuable for subgrade work, shaping bad spots, working short stretches, or where turning was difficult.

With the blade now mounted in the center position on the blade beams, the new Auto Patrol also permitted a correct ditching position on either side, with the toe of the 12-foot blade directly behind the front ditch wheel and ample clearance to prevent clogging.

Its six-cylinder Caterpillar diesel engine delivered 66 brake horsepower and was mounted over the driving axle to best utilize its weight in preventing wheel slippage. A gasoline starting engine ensured easy starting regardless of atmospheric temperatures.

The transmission offered six forward speeds and two in reverse. A low speed provided both maximum pull for the heaviest jobs and more precision for fine grading. Second speed permitted faster operation for most ditching and other heavy work. The higher gears provided an ample speed range for a mix of road work, snow removal and travel.

The Caterpillar Diesel No. 12 Auto Patrol was even equipped with two-speed powered mechanical blade controls. A simple shift of a lever gave the operator faster control for the longer blade movements required by coarse work. For close finishing work, a slower control setup provided extreme accuracy in blade settings.

In its first year alone the No. 12 worked on many well-known and important projects around the world:

The DNA of the Diesel No.12 is still on the product line today, where it is known as the Cat 12M series. With over 80 years of service, it is the longest-running production model in the grader product line.

The No. 12 is an example of Caterpillar using cutting edge technology to provide our customers with the solutions they need. Today, we continue to focus on the changing needs of our customers by expanding our product and service offerings.

To learn more about Caterpillar’s long history of innovation, go to caterpillar.com/history.

Caterpillar Diesel No. 12 Auto Patrol at working in 1938. 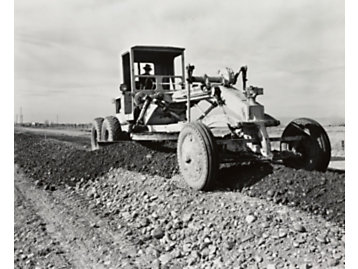