It All Began on Thanksgiving Day 1904

In late fall of 1904, Caterpillar co-founder Benjamin Holt had a big problem.

As capacity of his newly invented steam tractor climbed, weight increased accordingly. And as weight went up, the wheels on his tractor went further into the soft California delta soil.

At first Holt attacked the problem by adding more wheels and making them larger to increase the load-bearing area on the soft earth, but the resulting machines were expensive and unwieldy. The need was evident: more traction through greater ground contact area with compactness and better maneuverability.

These considerations brought Holt around to the idea of a "treadmill" type of machine to pick up and lay its own broad base as it traveled, as if it were a portable railroad. The concept of such a vehicle was hundreds of years old. Inventors had previously built several track-type machines, but none was practical enough to achieve continuing commercial success.

Testing of the first track-type tractor occurred on Holt property in the delta region. Holt steam tractor No. 77 wheeled for the last time on the way to the site, and once there, Holt and his assistants removed its wheels and installed a pair of new crank units and wood tracks. The test was successful, and thus the first practical track-type tractor was born on Thanksgiving Day 1904.

The 40-horsepower machine even managed to outperform a substantially more powerful wheeled counterpart, pulling four gangs of plows two inches deeper than a wheeled Holt 60-horsepower model pulling three similar gangs. The test was later described in the Farm Implement News, "In a tract where a man could not walk without sinking to his knees and where horses could not be used, the new track-type tractor was operated without a perceptible impression in the ground. This tract of land has been useless for crop raising for several years because no way was found to plow it, but the track-tractor has brought the land into use again. It is predicted that with the new device it will be possible to work any of the soft lands of the reclaimed districts and bring into cultivation thousands of acres of rich areas that are now unproductive."

A look from the back of the first practical track-type tractor. 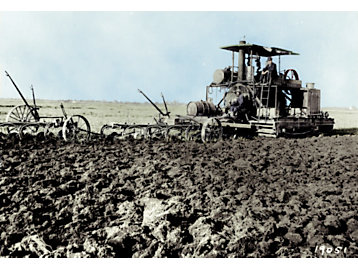 Seeing a Giant and Finding a Name

One year later a company photographer saw the machine and referred to it as a “giant caterpillar.” Holt took a liking to the name, and his company started regularly using it on track-type tractors in 1908. The machines were officially trademarked as “Caterpillars” in 1910, and in 1925, when the Holt Manufacturing Company merged with the C.L. Best Tractor Co., they choose Caterpillar as the name of the new company. It is a name we are still proud to have today.