The Story of Patricia Manning Who Worked Second Shift in 1944

A Rosie of Our Own.

Patricia Manning Langenberg was a Caterpillar employee during 1944 – a time during the World War II era when women were called to fill jobs typically been held by men. Women like Pat were responsible for keeping the home fires burning, families fed, and the economy clicking while men were away serving in the military.

Rosie the Riveter is often used as a symbol of these women who brought American feminism and economic advantages of women to light. Similar images of female war workers appeared in Britain, Australia and other countries.

Today, Pat is a spry 98-year-old who still lives in Peoria, Illinois. Lee Fosburgh, historian and manager of Caterpillar’s corporate heritage archives, recently caught up with Pat to talk about her time at Caterpillar. On this, International Women’s Day, we pause to honor Pat and those who lead by raising awareness against bias and acting for equality on behalf of all.

Next to former Caterpillar employee Patricia Manning’s senior picture in Peoria High School’s 1944 Crest yearbook, it says, “Pat always flies high.” We believe it, too. Pat worked at Caterpillar more than seventy-five years ago, yet she remembers it as though it was last week – and views it as a sunny day.

Like many girls of her generation, Pat applied and interviewed for a secretarial job at Caterpillar after high school graduation. But once she learned that factory work paid more – and that second shift paid even more yet – Pat chose a second-shift factory job working on the bearing cap line, measuring bearings with a gauge to validate milling.

So, in early 1944, Pat became a Caterpillar employee and somewhat of a national symbol. Pat was part of the influx of women during the World War II era who were called to take positions typically held by men.

It was a time when U.S. factories were busier than ever – many plants having been retooled to support the war effort. Although business was booming, most factories were suffering from a severe employee drought caused by 3.9 million Americans serving in the U.S. military in 1942. By 1944, the number of service personnel grew to more than 11 million.

Caterpillar was in a bind – hard-pressed to meet production goals set by the U.S. military. At the beginning of 1941, Caterpillar had approximately 11,000 employees in Illinois and California but needed nearly double that number by the end of 1944 just to keep up production.

To fill the void, Caterpillar – like many other manufacturers in the States and even abroad – turned to capable women like Pat Manning. When asked about how the women of the day felt about their contributions, Pat responds, “Every woman working at Caterpillar had a sense of pride adding to the war effort. From making dozers to collecting grease, to sending brownies to the soldiers overseas, we were happy to do our part.”

As women like Pat and her colleagues stepped into civilian and military jobs left behind by men who were at war, something profound began to happen – social boundaries and norms began to change. When women proved they could do jobs once considered only for men, people began rethinking beliefs about gender and the roles women and men could and should assume in their families and communities. Indeed, some historians believe that the events of World War II empowered women to begin a movement for social change and equality for women.

The Rest of the Story.

As for Pat, she left Caterpillar one warm November afternoon when her military beau, Jack Langenberg, came home on Thanksgiving leave and asked for Pat’s hand. Jack had been a machinist apprentice at Caterpillar before enlisting in the military, where he served as a fighter pilot in New Guinea and the South Pacific. During his service, Jack was recognized as a war hero and awarded the Air Medal for meritorious achievement in the South Pacific.

Once the war ended, Jack returned home to Pat and rejoined Caterpillar as a design engineer. The couple raised a family and were the quintessential Caterpillar family – they even owned a 1931 Caterpillar Sixty that worked on the family farm. And they’ve kept it all in the family since then. Pat and Jack’s son, Pipper Langenberg, retired from Caterpillar and their granddaughter, Sarah Johnson, works in Product Support & Logistics Division as a buyer.

Jack worked at Caterpillar from 1939 – 1979 and passed away more than 20 years ago, but Pat remembers both of their Caterpillar employment years with much fondness. “It was a great place to work,” Pat says – her voice sounding far younger than her 98 years. “I’m so thankful and proud that when Jack retired, Caterpillar counted his years of military service as time worked at Caterpillar when they calculated his retirement benefits. It really is a wonderful company.” 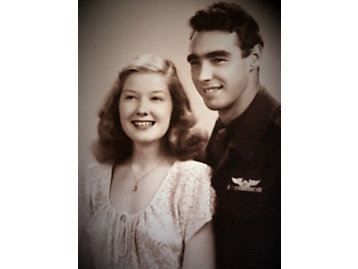