In 1963, a D8 Tractor was used during the ground breaking ceremonies for the construction of the 1964-1965 World’s Fair complex in New York City, New York.

Machines produced by Caterpillar helped construct the fairgrounds and various buildings and, as construction continued, there were nearly 200 Cat® machines working on the site. Several hundred additional machines were used to widen highways leading to the 646-acre fair site. Track-type tractors, wheel tractor-scrapers and track loaders (like the 977 Traxcavator pictured above) were the popular machines found on the job.

Caterpillar also set up an exhibit at the fair which featured a 16-foot long D9 Tractor assembly, a D398 Engine crankshaft, a 10-foot tall wheel scraper tire, a 1673 Truck Engine and an illuminated Caterpillar display sign – all of which attracted a lot of attention from fair goers. More than 51 million people visited the various exhibits at the 1964-65 World’s Fair. 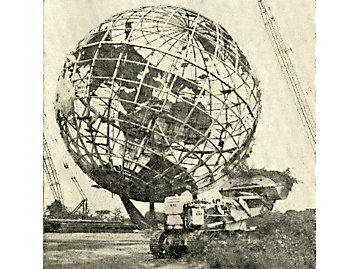