The “Caterpillar Sixty” is catching a lot of buzz lately as it celebrates 100 years—but Caterpillar’s Advanced Materials Technology team has reason to celebrate as well. August 2019 marks 100 years of “making the metal worthy of the machine” through metallurgical science and engineering.

Metallurgy is one of Caterpillar’s earliest core competencies. Metallurgical teams around the world create and develop new technologies and materials to enable global design and manufacturing groups to deliver world-class customer value. In fact, metallurgical knowledge remains one of our critical core competencies and the numbers speak for themselves. Annually, Caterpillar machines and engines consume millions of tons of castings, wrought steel, forgings, and heat-treated components. Clearly, metallurgy is at the heart of our products and processes.

There is no doubt that steel, casting and heat treat technologies helped establish Caterpillar’s reputation for quality and durability. While a lot has changed over the years, Caterpillar materials and heat treat are still recognized as world-class and used as an industry benchmark.

History of Metallurgy at Caterpillar

Caterpillar Tractor Company was formed in 1925 by the merger of two fierce competitors in the early tractor business: Holt Manufacturing Company and the C.L. Best Tractor Company. The history of metallurgy at Caterpillar, however, started even before the company began.

1920s-1930s: “Caterpillar Quality” was introduced and included, enlarging the Met Lab's chemical and physical analysis facilities and creating the first 1E specifications to capture metallurgical requirements. Metallurgical operations grew to include 16 personnel and the lab moved to a larger area to accommodate development of oils, wash tanks and bearing material testing. In 1931, Caterpillar was issued its first known patent in the field of metallurgy entitled “Furnace,” which disclosed a heat-treating furnace designed for more efficient maintenance. In the late 1930s, the important role of failure analysis was added.

1940s-1970s: In the 1940s, more labs were introduced expanding Caterpillar research and development in metallurgy, and a formal Metallurgical Engineering Rotational Development program was created that continues today. Also, in the 1940s, heat treat engineering was formed as a formal section and this would begin Caterpillar’s development of world-class heat-treating processes. In the mid-1950s, the first Caterpillar metallurgical laboratories outside the United States were formed in England and Scotland. In 1963, Research Metallurgy moved into the Technical Center in Mossville, Illinois, and led the industry in developing steels and performing a wide range of heat treatments and unique material testing.

1980s-2010s: Fast-forward to the 1980s, 20 metallurgical organizations existed globally, and worldwide materials engineer meetings began that brought the community together. The 1980s also marked the beginning of Caterpillar research into new materials processing techniques like thermal spray coatings, thin film coatings, and lasers, which would all be delivered into production by the late 1990s. Heat treat technology advancements would also be seen throughout this time period in areas like quenching, atmosphere control and equipment automation. Caterpillar continued to be a leader in driving technology and quality improvements in the steel industry. The Caterpillar Hardenability Calculator became the steel mill industry choice for calculation of hardenability and the basis for numerous industrial specifications. Additionally, there are many other materials engineering and processing innovations that were delivered to Caterpillar customers.

Metallurgical artifacts on display at the "100 Years of Metallurgy" celebration. 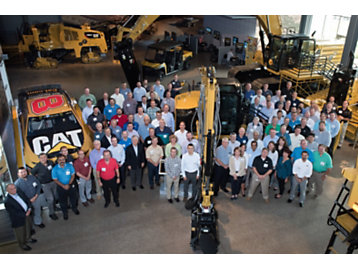 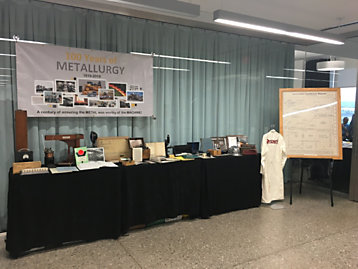 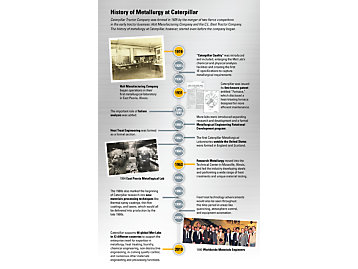