Cat® diesel engines have been famous on land for their dependability and economy since 1931. Seven years later, we decided to head off to sea. The demand for a marine diesel engine was high among boat owners, and we knew we had the ability to make a great one.

These engines, outfitted with a reverse gear, were ready for operation once five marine-specific connections were made. It was necessary to connect the exhaust to the atmosphere, sea water suction to a pump, the heat exchanger outlet to an overboard discharge, the fuel oil line to the main storage tank, and finally to align the thrust bearing shaft and connect it with the propeller shaft.

These engines were medium speed, medium weight engines designed and rated for continuous duty. They were ideal for work vessels, including ferry boats, tug boats, tow boats and fishing trawlers, as well as cargo and dispatch vessels.

The engines were ruggedly constructed and designed to handle continuous heavy loads. And because of their inherent simplicity, they could be serviced and maintained by any type of operator. However, as is still the case today, Caterpillar’s dealer network could supply 24-hour service to almost every part of the United States, providing replacement parts as needed, to avoid prolonged and expensive shutdowns.

Today, Caterpillar is the largest manufacturer of diesel engines, and the marine industry’s leading provider of medium- and high-speed marine diesel engines, propulsion solutions and vessel monitoring. For 80 years, these engines have helped forge the fine reputation we have today, exemplifying what we mean when we say our products are “Built For It.”

Operator working on a Cat® D17000 Engine powering the cargo boat "Tatria," out of Rotterdam, Netherlands 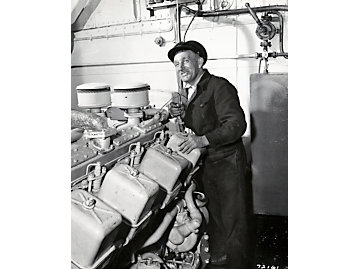