Evolution of the Dozer

This year we celebrate the 75th anniversary of the Cat® dozer blade. Some say it may be the ultimate part provided by Caterpillar to its customers.

Yep, the dozer part. The term “dozer” originally referred to a steel plate and an operating mechanism attached to the front of track-type tractors. Today, the term also refers to the rugged machines built for tough jobs pushing dirt.

Hear the story of the dozer – from blade to machine – and find out why it’s a fan favorite.

An Origin Story Buried in the Past

The origin of the dozer blade is buried in the past as deeply as the origin of the wheel. But even as late as the 1800s, dozer blades were crude by any standards. They were made of wood and affixed to the front end of a pole that was pulled by horses or oxen. Their main purpose was to spread loose dirt out over a fill as it accumulated.

In 1914 the Holt Manufacturing Company, one of Caterpillar’s predecessor companies, introduced a dozer blade in front of the machine that was controlled by a rope windlass fastened to the tractor’s main frame. They continued to make dozers in small quantities until they were discontinued after their merger with the C.L. Best Tractor Co. in 1925.

A Legend Is Born

Before 1945, suppliers designed and sold earthmoving attachments designed specifically for Caterpillar tractors. In early 1945, Caterpillar began developing its own line of dozer blades that met Caterpillar specifications and quality standards. Dozer blades originally came in straight, angling, and "U" shapes, both cable- and hydraulically- controlled.

The first Caterpillar tractor with the new dozer blade left Peoria, Illinois, in 1945. Throughout 1945, engineers performed exhaustive tests on this new product at the company's proving grounds in Illinois and Arizona, and operators tested the attachments at various locations throughout the United States. The performance of experimental and first-production models gave assurance that these new items of earthmoving equipment would sustain and enhance the high reputation of Caterpillar products.

First shipments of Caterpillar track-type tractors with accompanying Caterpillar dozer blades were made later that year. The Caterpillar track-type tractor quickly became known as a “dozer” and the legend was born. These machines worked on some of the modern world’s greatest engineering projects, including the U.S. Interstate Highway System, the Three Gorges Dam in China, and the widening of the Panama Canal, just to name a few.

Operator In Mind From Lift Up to Remote Control

Another big change in dozers… how the operator uses the controls.  It started with cable controls that could only lift up, then hydraulic controls came along. These were easier to use and could lift up or push down. Eventually dozers progressed to having an onboard computer that could control the blade for the operator to produce a predetermined design. Today’s operators can use our latest Command for Dozing. It allows the operator to control the dozer remotely, from anywhere in the world.

Whether the job is moving material or finish grading, there’s a Cat® dozer made for it — small, medium or large. Plus, with a big selection of undercarriage, drive train and blade configurations, customers can customize their new dozers to accommodate virtually any job requirements.

Since Caterpillar began making dozer blades 75 years ago to today, there’s one thing that remains true: Dozers are reliable machines to get a lot of tough jobs done.

How the Dozer Blade Became Synonymous with the Tractor

The dozer became part of popular culture due to its superior performance during World War II. American Admiral William F. Halsey once said, “If I had to give credit to the instruments and machines that won us the war in the Pacific, I would rank them in this order: submarines first, radar second, planes third, bulldozers fourth.”

"Boss of the Beach," said Army Engineers Chief Major General Eugene Reybold about the dozer. "The indispensable, all-purpose weapon of the Engineers."

What the World War II news coverage seldom made clear was that the dozer (also called a bulldozer) was not the tractor, but actually the steel plate and operating mechanism, made by a supplier, that was attached to a standard Caterpillar track-type tractor. During this era, it was not uncommon for companies to make earthmoving tools, such as dozer blades, that were specifically designed for Caterpillar tractors.

Go behind the scenes with the Cat team

To make it on the jobsite, Cat products have to pass rigorous testing. Follow the all-new Cat D6 Dozer as it rolls out of the factory and into the dirt. Can the new machine stand up to the punishment of the worksite? Go behind the scenes with the Cat team as they put the D6 Dozer through an endurance trial, pushing the machine to its limits in the far north of Canada. 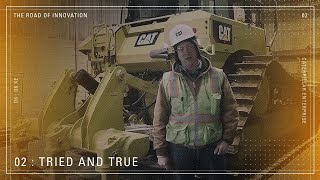