Did You Know Caterpillar Had a Baby?

In 1912, Holt Caterpillar introduced its first “baby” to the public. It was neither a boy nor a girl, nor was it delivered by a doctor or a stork. This “baby” was not a person, but a brand-new, 30 horsepower Caterpillar track-type tractor.

The “baby” Caterpillar looked just like its older tractor brothers, but it was much smaller. Its diminutive stature came from being designed to work in the tight spaces of orchards and vineyards that demanded compact, highly maneuverable tractors to work in their groves.

Only 331 models were made, and it was only on the product line from 1912-1915. The “baby” was discontinued at the request of the U.S. government, so that Holt could concentrate on fewer models to support the Allies during World War I.

A “baby” Holt Caterpillar track-type tractor on display in Stockton, California, in 1912. 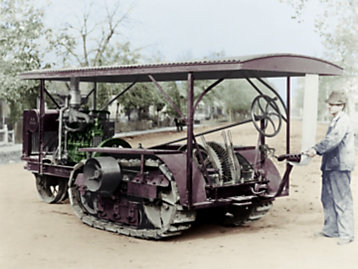