A Look Back at the Origins and History of CONEXPO

From 1,500 attendees to nearly 150,000 today, the show we know as CONEXPO/CON-AGG has roots over 100 years old and a fascinating part of America’s road construction history. Find out how it all began in 1909 and more memorable moments along the way to 2020.

In 1909, members of the American Road and Transportation Builders Association (ARTBA) held a construction equipment and machinery show in Columbus, Ohio. The following year, ARTBA’s “Road Show” featured 45 manufacturers and had 1,500 attendees. Bolstered by federal-aid road programs, rising federal and state revenues for road construction and a growing number of equipment manufacturers, the Road Show became a major attraction for highway engineers and road contractors by the early 1920s. From 1921 through 1927, Chicago hosted the Road Show and the number of manufacturers exhibiting their products grew from 213 in 1923 to 287 in 1925.

From January 11-15, 1926, the 17th Road Show took place in Chicago’s famous Coliseum and featured a wide range of both heavy and light equipment along with various construction materials from 295 equipment manufacturers – including the newly formed Caterpillar Tractor Co. Around 15,000 highway engineers, contractors and manufacturer representatives attended the 1926 Road Show.

This unique photo from the Corporate Archives historical photograph collection is special for two reasons.  It is our only photo of the Caterpillar Tractor Co. exhibit at the 1926 Road Show – the first equipment show the young company participated in. It is also the only known photograph that features all five tractors in the company’s first product line all lined up together. From left to right, we see the Caterpillar Sixty and Caterpillar Thirty (both formerly Best designs) and the 2-Ton, 5-Ton and 10-Ton Tractors (all formerly Holt designs). Within a few weeks, the 10-Ton would be pulled from the product line and the 5-Ton would be discontinued a few months later, leaving the company with only three products to sell by the end of 1926.

Through subsequent decades the Road Show was an integral part of ARTBA conventions. But at the beginning of the Interstate Era, in 1957, the Construction Industry Manufacturers Association took over the Road Show, which continued to evolve into what we now know as CONEXPO/CON-AGG. Nearly 150,000 people now attend CONEXPO, which is held every three years in Las Vegas, Nevada.

A big hit at the National Road Show at Cleveland was the daily Caterpillar paper whose pages were filled with news and pictures of Caterpillar customers and the construction projects our machines were involved with.

That paper reported that there were 30 Caterpillar products on display on Caterpillar’s 4,000 square feet of exhibit space and in booths of numerous equipment manufacturers who used Caterpillar engines in their products.

The newspaper also highlighted the 10,000th diesel engine (produced in November 1935 and placed in an RD6 Tractor) that was on display in the Caterpillar exhibit.

This exhibit also marked the first time the new RD4, RD6, RD7 and RD8 Tractors were displayed together at a trade show.

CAPTION FOR SCANNED PHOTO: “The Caterpillar exhibit covered 20,000 square feet of floor space at the National Road Show held at the International Amphitheatre in Chicago, Illinois in January 1940.”

Caterpillar’s 1940 exhibit included 54 separate displays covering 20,000 square feet of floor space. Caterpillar engines used to power the products of many other manufacturers were displayed in at least 30 other exhibits.

Two Caterpillar products of interest at the show included the new D468 Caterpillar Diesel Truck Engine (the first model in this product family) and an updated D7 Tractor. Several sales resulted from these displays, including an order for three D7s from our dealer in Kansas City.

CAPTION FOR SCANNED PHOTO:  “Ten new additions to the Caterpillar line, including the company’s first 500 horsepower diesel engine (the V12 D397 Diesel Engine) and a two-wheeled self-propelled wheel-tractor scraper (the DW21), were announced at the 1948 American Road Builders’ Road Show in Chicago.  Other products constituted expansions of existing lines.  Examples of this company’s ever-increasing line of products to handle every problem in earth moving created much interest among potential customers and other interested people who saw the Caterpillar exhibit, an aerial view of which is shown here.  Also creating much interest at the Show was Miss Illinois who can be seen at the left of the photo posing for photographers.  She was Caterpillar’s guest at the show.”

Future Caterpillar Chairman Lee Morgan was the project manager of the 1957 Caterpillar Exhibit.

The theme of the Caterpillar exhibit was – “One Goal…to concentrate the capabilities, resources and experience of our people and of the world-wide Caterpillar organization on the design, manufacture, distribution and service of heavy equipment.”

This was the first road show since 1948.

Caterpillar was one of 190 earthmoving equipment manufacturers at the road show.

Caterpillar introduced 6 new products and attachments in its exhibit.

Many dealers reported orders from customers right on the exhibit floor. 1,700 customers and dealers visited the Peoria, Decatur and Joliet plants while the show was in progress. Several dealers reported that the thing which really sold their customers was the visit to our plants.

Holt Caterpillar track-type tractors on display at the 1923 Road Show in Chicago.

Caterpillar original product line on display at the 1926 Road Show in Chicago.

Article on the 1940 Road Show that appeared in Caterpillar’s employee publication News & Views.

This poster was displayed in front of Caterpillar's 1957 CONEXPO exhibit. 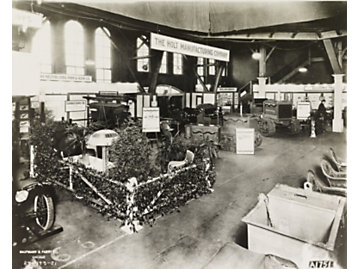 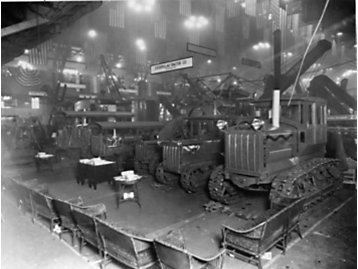 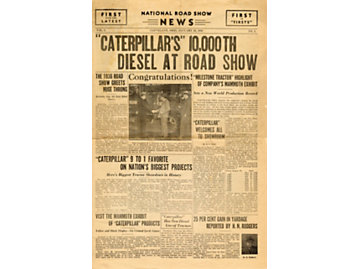 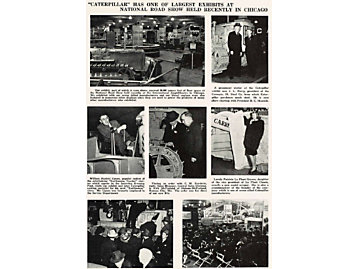 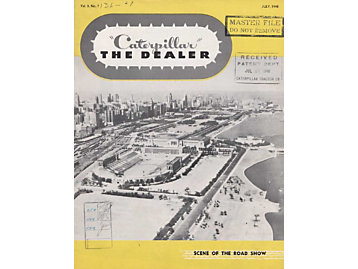 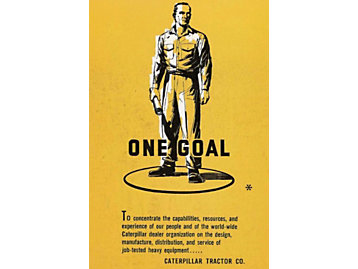