Visionary Murray Baker Paves the Way for the Caterpillar Trail

By Lee Fosburgh and Zack Brown

One hundred years ago, Murray Baker of the Holt Manufacturing Company in East Peoria, Illinois, discovered that natural conditions existed for the building of a scenic highway near Peoria.  This was the same Murray Baker who was responsible for Holt selecting East Peoria for its new plant in 1909. Holt was recognized for inventing the Caterpillar track-type tractor and the name we have today.

Baker said, “The building of the trail will be a great thing for East Peoria." Community funds for its construction were lacking, so he made community officials in East Peoria an offer to construct the road free of charge as a gift to the community. The Holt offer was eagerly accepted and work was soon under way.

The project allowed the Holt Manufacturing Company the opportunity to demonstrate the versatility of Holt’s products. He wanted the community to see that Caterpillar tractors could be used for building roads. At this time, Holt was more recognized as a leader in the manufacture of agricultural tractors.  Holt leaders, such as Baker, recognized the value in road building due to the rise of the automobile in American society.

In 1916, worked started with great fanfare and received positive reviews in the local press. The East Peoria Post said, "It was decided the drive would be called the Caterpillar Trail, in honor of the work to be done by the Caterpillar. The drive over The Caterpillar Trail will be, it is said, one of the finest and most delightful for many miles around." The gravel for the road was taken from Farm Creek, located outside of the Holt factory, and was engineered by a Mr. Burke from the Holt Plant.

A five-mile scenic highway was built with Caterpillar track-type tractors supplied by the Holt Company.  The work crew even had a community flair -- former East Peoria Mayor George Wamsley was the foreman and even operated the machinery. Mayor Wamsley said, "The Holt Company cannot be too highly commended for public spirt they have shown."

Two Holt Caterpillar 75 and one 60 tractors were up to the job. They pulled plows, graders and land levelers. They moved a carload of earth from spot to spot, shoving dirt into valleys and any low spots they could find. The big tractors were able to scale the hillsides and span the ditches.

The project immediately became a sense of company and community pride. One hundred years later and the names still sticks. Throughout the years, Caterpillar machines have had a hand in making improvements to the road. Although we cannot say for sure, we suspect this five-mile project was one of the first steps in helping Caterpillar become the company it is today.

Construction on the Caterpillar Trail in East Peoria began in 1916.

Caterpillar Thirty pulling an Adams grader to prepare the shoulders for the Caterpillar Trail - a scenic highway along the Illinois River.

Caterpillar Thirty with rooter plow performing the second operation in preparing subgrade on the Caterpillar Trail. 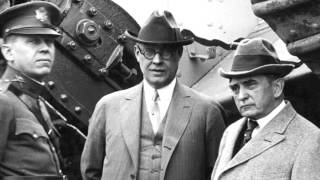 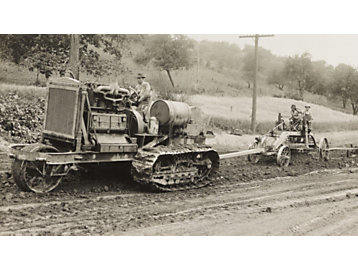 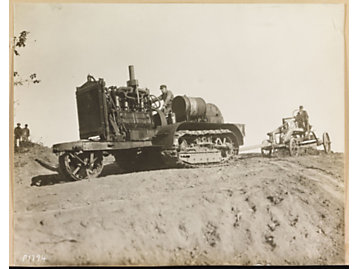 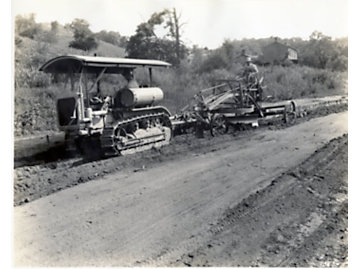 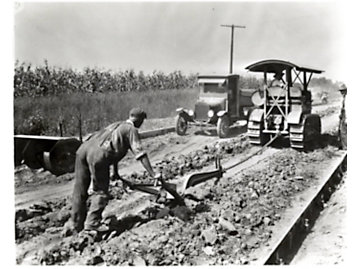