November 24 marks an important day in the Track-Type Tractor’s history -- and Caterpillar’s for that matter. On this day in 1904 in Stockton, California Benjamin Holt tested his steam-powered track-type tractor prototype for the first time.

Holt was not satisfied with the performance of his company’s steam traction engine tractors. Regions of California were difficult to prepare for crops because both horses and steam traction engine tractors got stuck in the soggy peat soil. Holt’s first inclination was to experiment with wider wheels. Some of his machines had wheels that were each 18 feet wide; the engine itself was already 10 feet wide. For that reason, roads and gates to fields needed to be 46 feet wide. These experiments were inefficient, costly and added to the weight of the machine without improving its performance.

After years of research, Holt instructed his mechanics to remove the rear wheels from the 40-horsepower Holt Junior Steam Traction Engine #77 and replace them with a pair of tracks he had designed. These tracks were nine feet long and 24 inches wide. The track shoes consisted of three-by-four-inch wooden slats bolted to an endless chain. The weight of the machine moved on rollers anchored to a supplementary frame.

On Thanksgiving Day, November 24, 1904, this tracked machine was given its first field test and it performed very well. Today, #77 is recognized as the prototype of the world’s first commercially successful track-type tractor. 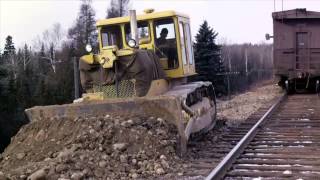