The origin of Caterpillar's involvement in the motor grader industry can be traced back to 110 years ago. In 1903, Richard Russell and Charles Stockland built their first horse-drawn elevating grader and formed a partnership - the Russell Grader Company- in a little town called Stephen, Minnesota. Richard Russell applied for a patent for this "first of its kind" elevating grader that had a gas engine driving the conveyor.

In 1908, Russell added a small road blade grader to its product line, the "Simplex," of which the cost for this simple (but soon very popular) grader ran between $105 and $150. Several more blade grader models were added over time.

Russell engineers began working on an early version of a motor grader in 1919. The "Motor Patrol" was released in 1920 and featured an Allis Chalmers tractor as the base machine with a grader frame built around the tractor. In 1926, Russell released their first motor patrol to feature a Caterpillar track-type tractor.

As Russell blade graders were frequently paired with Caterpillar tractors, Russell and Caterpillar leaders explored opportunities to expand their product lines together. As a result, on December 4, 1928, Caterpillar Tractor Co. acquired the Russell Grader Manufacturing Company and created a new "Road Machinery Division" to handle blade grader production and motor grader development. In April 1931, the Road Machinery Division introduced the industry's first true motor grader - the Auto Patrol - different from motor patrols in that it was designed as one machine instead of a separate tractor with a grader frame fitted around it. 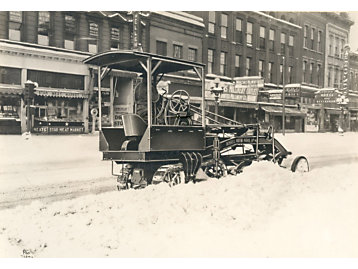