The Journey of “Old Betsy”

"Old Betsy" was the nickname given to the hand-built prototype of Caterpillar's first diesel engine model, the D9900. Assembled on June 28, 1930, in San Leandro, Calif., she was given the serial number 1A14 and was used in tests for more than 16 months before the engine was deemed ready for production in late 1931. Production of the Caterpillar D9900 Diesel Engine was discontinued in 1933 and "Old Betsy" was put aside.

When the research department was moved from San Leandro to East Peoria, Ill., in 1938, "Old Betsy" found her way to the East Peoria plant. Charlie Schad, a member of the original team that had built the engine, crated her up and put her in storage. In the mid-1960s, some of the buildings at Caterpillar's new research facility, the Technical Center in Mossville, Ill., were finished. Schad had pulled "Old Betsy" from storage, gave her a fresh coat of paint, put her on a wooden base and had her placed on display in the lobby of the new building.

A few years later, when Schad was getting ready to retire, some of the first California and federal emission standards were going into effect. To test how Caterpillar's engines fared against these regulations, several of them underwent smoke and emissions tests. To honor Schad, engineers also decided to test "Old Betsy." C. G. A. Rosen, the person responsible for designing "Old Betsy," traveled from California to witness the occasion. Forty-two years after she was first built, "Old Betsy" was put into a test cell and, to the amazement of the engineers, she passed the emissions and smoke tests with flying colors.

Forty years ago, "Old Betsy" was given to the Smithsonian's Museum of American History in a formal ceremony on November 29, 1973, as it was deemed of "significant historical importance." Caterpillar executives Bill Blackie, Louis Neumiller and Harmon Eberhard were all present as well as Charlie Schad, an honored guest at the ceremony. 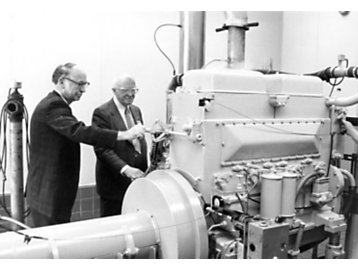