This year marks the 75th anniversary of the No. 12 Motor Grader. This machine was originally introduced as the "Caterpillar Diesel No. 12 Auto Patrol" in the summer of 1938, but was soon renamed as a "Motor Grader" just one year later.

Weighing in at 20,360 pounds, the No. 12 Auto Patrol featured a 12-foot blade, had six forward speeds and two reverse speeds. This machine, as well as other auto patrol models, was primarily used in the building of roads and snow removal.

The No. 12 Motor Grader has seen multiple advancements over the past 75 years. Caterpillar introduced articulated frames into its Motor Grader product line in 1973 with the 12G. The 12H increased productivity even further with a new electronically controlled eight-speed transmission and a redesigned cab providing operators with a better view when it was released in 1995.

The No. 12 Motor Grader is currently being produced at the North Little Rock Facility, Caterpillar Brasil Ltd. and Caterpillar Suzhou Company Ltd.

"For 75 years, we have continued to innovate and deliver a superior product - looking back to when the No.12 was created and its evolution over time is impressive," said Pat O'Connell, Worldwide Motor Grader Product Manager. "Cutting edge then and still today - it's exciting to think about what the future holds for our great machines. My personal thanks to the many generations of the global Caterpillar team who have developed, built and supported this highly successful machine."

Only four other machines produced by Caterpillar have ever reached a 75th anniversary - the D6, D7 and D8 Tractors in 2010 and the D4 Tractor in 2011. The No. 12 Motor Grader is the first product that is not a tractor to reach this milestone.

To commemorate this anniversary, the Caterpillar Visitors Center recently opened a new exhibit in its Heritage Gallery which displays No.12 scale models that showcase the product's expansive history. 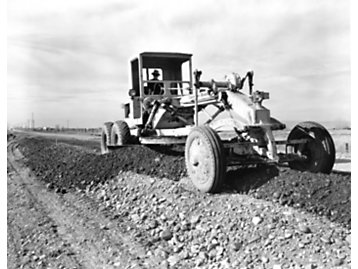