Doing the Work in Brazil

Our customers make an incredible impact on a region. Here’s a look at some of the ways we’ve come alongside our customers in Brazil in some major ways.

Brazil is a continental country, interconnected by over one and a half million kilometers of roads. It is not enough. There are still many destinations to conquer to bring life to remote places. That’s why Brazil represents a great potential in the paving sector.

It makes all the difference to have a safe and quality road. Our customers have the experience to build these paths that connect Brazil. They rely on Caterpillar for the equipment that ensures productivity and safety to the construction site.

In the early 1970s over 200 Cat machines played a key role in the construction of new highways for Brazil. One of the country’s boldest roadbuilding visions was the Trans-Amazonica Highway, which was made up of 3,300-miles of roadway. It was to be more than a major highway. It was the connection between eastern and western borders. Its construction immediately created 15,000 jobs and opened vast swaths of territory for farming, cattle raising, and mining.

Keeping the Lights On

In 2001, Caterpillar shipped 760 megawatts of electrical generating power to Brazil as part of a massive one-gigawatt distributed-generation project to relieve electric power shortages. With 90 percent of Brazil's power coming from drought-stricken hydroelectric plants - and mandatory rationing imposed by the Brazilian government - this was the largest electric power project ever undertaken by Caterpillar anywhere in the world to that point in time.

"It's probably the worst power crisis in Brazil's recent history." said Jim Parker, former director of Caterpillar Electric Power. "Between our Electric Power Group and the Cat Americas group, we are shipping generators to Brazil as fast as possible." One of the Caterpillar solutions was the installation of 31 Cat 3516 power modules at a power plant in Rio Branco, Acre, Brazil. The power plant allowed Acre to have surplus power – a rarity at the time.

We love helping our customers make new things possible in the community – and, in the meantime, challenge ourselves to do more than ever before.

Learn more about our history in Brazil. 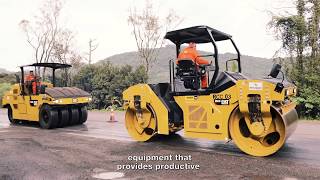