To see it with his own eyes, Mostyn McNeil was willing to travel a few miles to see how high-quality engine castings are made at Caterpillar’s Mapleton Foundry. 9,734 miles to be exact. McNeil is a mechanical engineer for Austal, an Australian-based global ship building company and defense prime contractor specializing in the design, construction and support of defense and commercial vessels. Austal leads the international market for manufacturing high-speed water craft – including passenger ferries, various vessel types for navies, coast guards and police forces around the globe.

“We use a lot of different engine manufacturers including Caterpillar, and we are talking with your company about upcoming product line developments and determining what our needs are with the new vessels we’ll be manufacturing,” said McNeil. He is currently working on the design of a Cape-class patrol boat variant that Austal is developing for the Trinidad and Tobago Coast Guard.

McNeil is based in Western Australia and recently made his first-ever visit to Caterpillar facilities in the United States, accompanied by Energy Power Systems Australia (EPSA), Caterpillar’s authorized dealer in Australia for Cat®-branded engines.

“We had very little business with Austal and it’s taken some years to create the relationship we have today,” says John Taylor, EPSA Marine Business Manager. “Austal has developed quite a bit as a company since they started 31 years ago. We’ve seen them grow and we’ve grown with them. We are very much aligned with their business in terms of their patrol vessel program activities. I think it was a turning point for EPSA when we became increasingly involved in the cost ownership discussions and modeling, the global support network and through life support of the product which is the lowest in terms of maintenance, parts and everything that goes with it.”

McNeil notes, “On the Australian Cape Class Patrol Boat, our customer preferred Cat® engines in their vessel because of the Cat dealer network all around Australia, the parts availability and servicing, and being able to maximize the availability of their vessels.”

Today, over half of the vessels Austal makes are high-speed ferries that are constantly running and have high maintenance requirements. Austal installs a range of C18, C9.3, C7.1 and C4.4 Cat generators in many of these watercraft.

On average, it takes Austal about 18-months from start to finish to build a ship. McNeil’s tour of the Mapleton Foundry, the Tech Center in Mossville and the Lafayette Engine Engine Center in Indiana gives him an even greater appreciation of the construction process for Austal’s ships but Caterpillar’s products too.

“This visit is a perfect example of getting the voice of the customer and add their input into the development of the engines they need and put us into a better competitive position,” said Morgan Ang, Territory Sales Manager in Caterpillar’s Oil & Gas and Marine Division.

As McNeil prepared to head back home, he said, “For us, it’s not about buying the cheapest or most powerful engine – so much more goes into a buying decision. We have to make sure it is something that is good for the life of the vessel. In this case, that ends up being Caterpillar.” 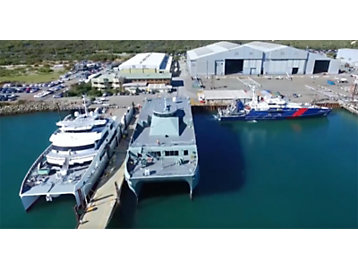 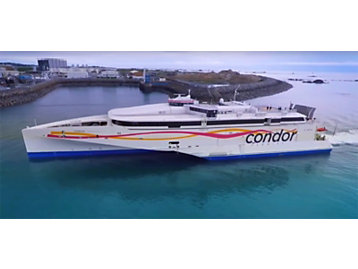 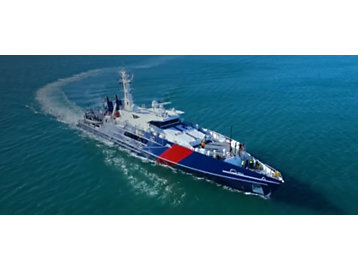