At Caterpillar, we’re known for creating innovative products that satisfy a previously unfilled market need. And we’ve been doing it for nearly a century. The history of our No. 6 Shovel – also known as the Traxcavator – which began production 70 years ago, certainly tells that story.

The new machine was conceived and constructed as a complete integrated tractor shovel rather than a tractor plus attachment. The design’s engineering innovation gave the two-yard-capacity machine excellent balance and stability, while its low overall height allowed it to operate in areas of restricted clearance. Other technology advancements, such as a raised seat giving the operator easy line-of-sight to the bucket, increased productivity and safety.

The Caterpillar No. 6 Traxcavator in action 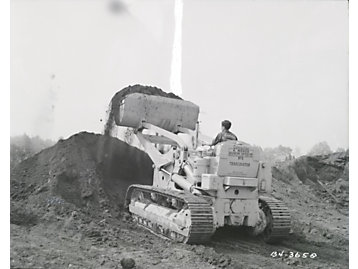 No. 6 Traxcavator loads dirt into a truck at a gravel pit in Arlington Heights, Illinois (circa 1953). 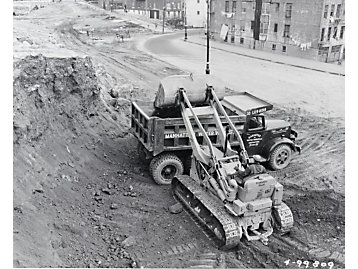 Leonard Scharringhausen owned a gravel pit near Arlington Heights, Illinois, in 1952. He purchased one of the first No. 6 shovels from Cat® dealer Patten about a year before it was manufactured. Just one week after the new machine delivered, Mr. Scharringhausen sang its praises.

“It’s doing all I expected of it and even more … I bought this machine sight unseen strictly on Caterpillar’s reputation alone,” the happy customer reported in the April 1953 edition of Caterpillar’s employee magazine, News … and Views.

The very first No. 6 Shovel took its place at the 35-acre gravel pit along with the rest of Scharringhausen’s Caterpillar fleet, including a Link-Belt shovel powered by a Cat diesel D318 and a Cat D4. But Scharringhausen wasn’t the only one to purchase the No. 6 shovel prior to production.

Patten General Manager R.S. Patten said, “Before our first No. 6 was delivered, we had seven signed orders due to dealer and Caterpillar name preference.”

Indeed, the interest in the new machine was strong. During the first week of the new Shovel’s operation, more than 50 contractors made trips to Scharringhausen’s gravel pit to see it work. Scharringhausen said, “If Patten Tractor & Equipment would display 25 No. 6 Shovels at my gravel pit, I’d sell all of them myself in a couple of months.”

The No. 6 Shovel was eventually replaced by the No. 977D, which took center stage as the largest in the group of Traxcavator track loaders in late 1955 – built on the success of the No. 6 machine. The Cat 977D continued into the 1960s as an upgraded series with more horsepower and larger-capacity buckets. 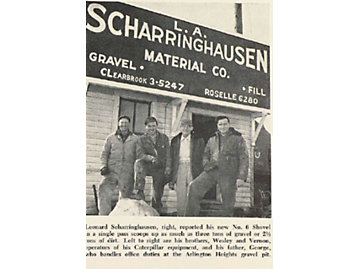 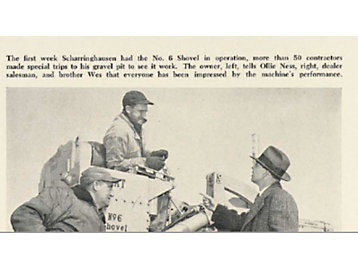 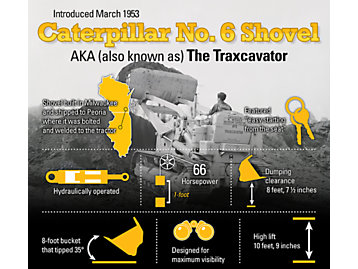 A Legacy of Customer Focus

Some people say history repeats itself. At Caterpillar, we say when you have a plan built on customer satisfaction, innovation and industry leadership follow. We’re laser-focused on taking care of our customers and making sure they’re more successful using our products and solutions than they would be using any other brand.

Caterpillar Archivist Katie Potempa said, “I’m relatively new to the Caterpillar team, and I love researching Caterpillar’s legacy of innovation and how we take care of our customers. As a corporate archivist, I study and help preserve our company’s heritage. One theme I repeatedly see throughout history is how Caterpillar and Caterpillar people were determined to use the latest technology to help our customers build a better world.”