As the world waited and watched for nearly a week, Caterpillar customers were on the job around the clock, helping to refloat a large container ship – named Ever Given – blocking traffic in the Suez Canal.

You’ve no doubt heard the story many times by now. A vessel enroute from China to Europe ran aground in the busy maritime throughfare. But it wasn’t just any ship. It was one of the world’s largest container ships – nearly a quarter mile long and weighing 200,000 metric tons – that became stuck in the waterway, blocking traffic in both directions.

You’ve probably also heard that after nearly a week of being lodged diagonally across the canal, the Ever Given was refloated and commenced its journey along the 120-mile historic waterway. The 400+ vessel-backlog waiting to pass through the canal finally dissipated, and now it’s business as usual at the global shipping lane.

But what you may not know is how the ship was ultimately freed and what role Caterpillar customers played in the rescue. It was, of course, a complicated effort that included numerous companies helping to dislodge the giant vessel – many of them were Caterpillar customers. Some customers owned tugboats or dredgers powered by MaK™ and/or Cat® engines. Some of the vessels work at or near the canal as part of their everyday job. Some teams were summoned from afar.

But they have one thing in common: They were there when the call for help came, and they got the job done. It was a herculean effort put forth by many who came together and worked as one team. We’re proud to support these customers and our dealers, Mantrac and Unatrac, who supplied service teams and parts for all the MaK- and Cat-powered equipment on location.

Eleven out of the 15 vessels at the site were powered by MaK and Cat for a combined 127 MW / 172.600 HP MaK and Cat, respective 1061 Tons of Bollard Pull. MaK and Cat power was responsible for an amazing 77% of the total available power on location.

Caterpillar Group President Joe Creed said, “We’d like to thank all those who were involved in the chain of events that led to the safe, successful salvage operation of the Ever Given, once again opening maritime traffic in one of the world’s most important waterways.” 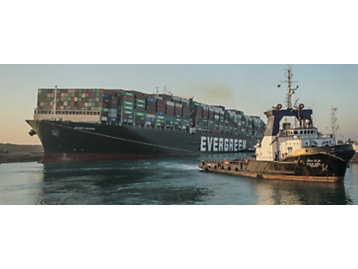 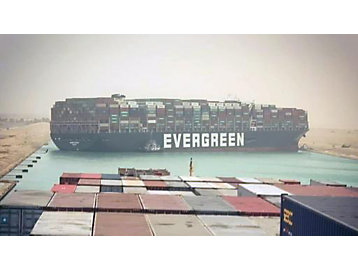 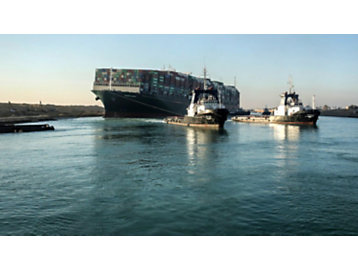 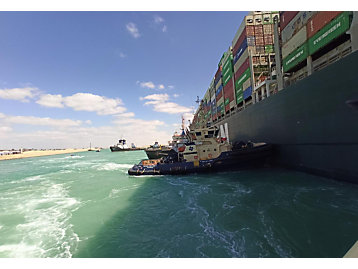 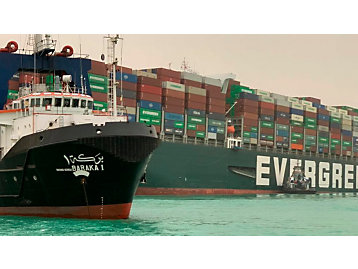 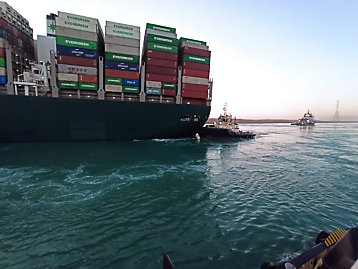 Caterpillar and the Suez Canal

At Caterpillar, we help our customers build a better world. It might be through supplying heavy construction equipment so customers can build infrastructure, connecting people and places. Or it might be by providing power that helps customers keep things moving.

When it comes to our history with the famed Suez Canal, it’s both.

A Bit of History.

Construction of the Suez Canal began in 1859. It was complete 10 years later – originally a lock-free, single-lane waterway, connecting the Mediterranean Sea to the Red Sea. It was a daunting task. And at the time, one that many considered impossible.

When the canal opened in 1869, it began almost immediately to have a profound impact on world trade, making the movement of international cargo faster and cheaper. Cutting across the Isthmus of Suez in Egypt, the canal separates the continent of Africa from Asia, providing the shortest maritime route between China and Europe. Although governance of the waterway has a troublesome history, it remains a critical route even today – estimated by some to handle about 10% of current global maritime commercial traffic. 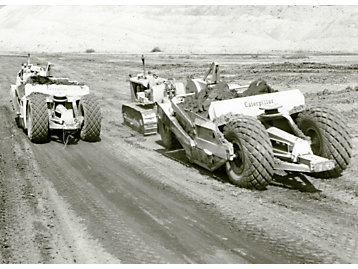 As could be imagined, maintaining such a large waterway requires continual upkeep both then and now. In 1956, heavy earthmoving equipment was used to widen the canal. Three Cat® D8 dozers and two No. 80 scrapers were purchased by the F.E. Whiteman & Son Co. It is believed to be the first time heavy construction equipment was used on the historic canal.

According to Caterpillar Historian and Archivist Lee Fosburgh, “Our records indicate the contractor said that the Cat equipment easily negotiated the steep grades. The contractor also noted that Suez Canal engineers, whose experience had been with hand laborers, were amazed at the size of the loads the scrapers could move.”

Our history of powering vessels that cruise and maintain the Suez Canal begins in 1954 when EMD diesel engines first powered two Suez Canal tugboats – named the Qirsh and Chadid. The next batch of three EMD diesel-powered tugs were put into service in 1962 and 1963 – those tugs are still in operation today. The tradition continues with many other customers who work on canal operations relying on MaK and Cat engines to keep their vessels moving.

Rod Shurman, vice president of the Caterpillar Oil & Gas and Marine Division (COGMD), says, “Our marine customers at the Suez Canal and all over the world are responsible for keeping global commerce moving, 24-hours a day, every day. It’s a big responsibility and one that Caterpillar and our worldwide network of dealers are proud to support.”

Since 1938, Cat® Marine has been powering vessels in ports the world over. We are the marine industry’s leading provider of medium- and high-speed marine diesel engines, propulsion solutions, and vessel monitoring. Yesterday, today and tomorrow, Caterpillar is committed to providing our customers – whether on land or sea – what they need, when they need it. We know our customers will be there when the phone rings. We’ll help make sure they’re ready to go.

From marine diesel engines and generator sets to technology solutions, Caterpillar Marine is your partner on the water — backed by the worldwide dealer support network.