Centuries ago, the residents of Hosur — a community of nearly 500,000 in the Indian state of Tamil Nadu — created a system of cascading lakes to harvest rainwater. Stormwater drains carried surplus rainfall from higher elevations to lower ones, supplying water to residents, recharging groundwater supplies and preventing flooding.

Unfortunately, like many bodies of water around the world, these lakes fell victim to excessive pollution as Hosur industrialized and grew. Water channels were encroached and converted into open drains carrying residential and commercial sewage and wastewater. Silt build-up blocked inlets and outlets, further contributing to deterioration.

By 2018, several lakes were in danger of dying, until a community project spearheaded by a Caterpillar facility in Hosur set out to reclaim and rejuvenate them — improving both quality of water and quality of life for the community. 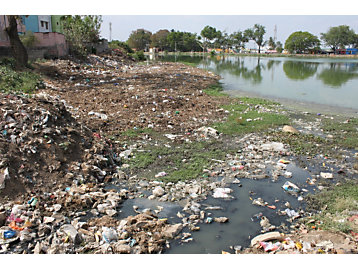 A lake on its last legs

Situated in the heart of Hosur, Therpet Lake serves as both an important source of water and gathering place for the community. But the 7.5-acre body of water — about the size of 4 soccer fields — had never been cleaned and was drying up at an alarming rate. What water remained was filled with untreated waste, high in nitrate and phosphate content, and overrun with algae and water hyacinths.

Left in this condition, it was only a matter of time before Therpet Lake would die, shrinking groundwater levels and hampering Hosur’s ability to fight drought — an unacceptable outcome in this water-scarce area.

That led The People Society of Hosur to approach the Industrial Power Systems Division (IPSD) Hosur team, part of Caterpillar India Pvt Ltd (CIPL). Members of the group had heard about CIPL’s commitment to increasing access to clean water, sanitation and hygiene and asked the company to lead the reclamation efforts.

A community commitment to clean water

With support from the United Way as well as local and state governments, the IPSD Hosur team guided the community in transforming Therpet Lake from a dirty, dying body of water to a thriving, self-sustaining water source. The two-year project involved:

To enhance residents’ enjoyment of the lake — and to encourage them to help sustain this revitalized water source for the future — the team also installed a new pathway with lights and benches, planted trees and created an island.

Today, Therpet Lake’s water-holding capacity has risen to 16 million gallons (61 million liters) — enough to recharge the groundwater and supply water for local families. The project was replicated on three nearby lakes, and the IPSD Hosur team received recognition from the government of Tamil Nadu for their efforts in “restoring the original glory of four water bodies in and around Hosur.”

For more on Caterpillar’s water management efforts, take a look at our Sustainability Report.