Holt Side Hills Baseball Team of 1910

As America prepares for the annual Major Baseball League All-Star game next week, we pause to reflect on the lives of two brothers, Harry “Clyde” Tremain and J.C. “Carl” Tremain, Holt employees who played baseball on the Holt Side Hills company-sponsored team circa 1910 in Stockton, California. They were all-stars in their own right.

Imagine Holt Manufacturing Company in Stockton, California, around 1910. It would have been an interesting time to be a Holt employee – just six years after Benjamin Holt created the first track-type tractor prototype, the company was a leading manufacturer of combines at the time.

Since Stockton was first and foremost a farming community, it’s not surprising that the city’s manufacturing sector grew up centered around farm machinery. At the time, California was the world’s largest producer of wheat. In 1910, Holt had just trademarked the name “Caterpillar” for its flagship machine that would revolutionize earthmoving forever with the ability to plow low-lying fertile delta lands too soft for conventional methods. With fewer than 50 employees in the Stockton plant, it’s probable that each of them personally knew Benjamin Holt.

The Holt Side Hills baseball team was named for the Side Hill Combine manufactured by Holt. 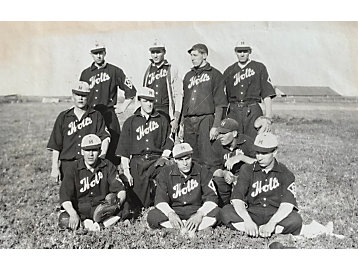 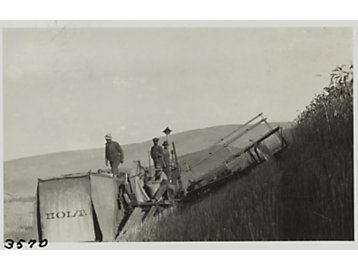 As baseball became America’s favorite pastime in the early 1900s, it exploded as a recreation, and many companies sponsored hometown teams. Holt Manufacturing was no exception. The team was named Side Hills after a model of combine harvester built by Holt.

We know most Stockton employees of 1910 were men – and many of them loved to play baseball, which was popular in Stockton. Why not? Some historians believe that the town of Mudville referenced in Ernest L. Thayer’s classic 1888 poem, “Casey at the Bat,” is actually Stockton.

The Tremain brothers, Clyde, 28 (bottom center in the photo), and Carl, 30 (we’re actually unsure which player is Carl), were Holt employees who built combine harvesters by day and played baseball in their free time. The brothers were born in Kansas, and at least for some period of time, lived together with their wives and families in the same small house, which still stands on South Grant Street in Stockton today.

Clyde’s grandson, Steven Tremain, is a physician who grew up in Stockton. He well remembers and honors his grandfather’s and great-uncle’s affinity for baseball.

“The whole family loves baseball, and each generation was raised on it,“ Steve says. “My grandfather was a Yankee baseball fan because there were no professional baseball teams on the West Coast until the late 1950s when the Giants and Dodgers came out. But my grandfather could always catch the Yankee games on the radio.”

The Tremain family has an exhibit in their house displaying several generations of well-worn baseball gloves – and Clyde’s glove from the Holt Side Hills days is proudly featured. Today, Clyde’s great-great-grandson is a starting pitcher for Sacramento State.

In life, as in baseball, time marches on. In 1925, Holt merged with the C.L. Best Company to become the Caterpillar Tractor Co. and began to move manufacturing to the Midwest.

Five years later, Carl served as mayor of Stockton from 1930 – 1932. He’s remembered today for his instrumental role in building the Port of Stockton – the world’s second inland seaport – an engineering marvel that required deepening, straightening and widening 50 miles of the Stockton Channel.

After he left Holt, Clyde eventually went to work for the railroad and retired in 1949 as yardmaster of the Stockton Yard. Grandson Steve still remembers how as a young boy, his grandfather took him to the yard to ride on the open back of a diesel switcher and share stories about life and times.

“It was a different time,” Steve says of his grandfather’s youth and years employed at Holt. “After he passed, we learned that my grandfather had lost a wife and daughter when he was very young, but he never talked about it. Things were hard in that day, but people were resilient. When life tested them, they rose to the occasion and just kept moving forward.”

One thing seems certain – whether on the factory floor or the baseball field, teamwork was the order of the day for the two brothers who lived, worked and played together. Since teamwork is one of Caterpillar’s Values in Action, it seems fitting that the principle of working together to achieve common goals was so prominently displayed as far back as the Tremain brothers’ tenure at one of our predecessor companies.

Learn more about our history with a glimpse into Caterpillar’s corporate archives.

A few years ago, Clyde Tremain’s grandson Steve found one of the first-known Caterpillar company badges among his grandfather’s possessions. The badge likely dates back to 1915. Steve recently donated the badge to the Caterpillar Heritage Services archive.

During World War I, the Stockton facility began making machinery for the Allied forces, and a government contract required that suppliers increase security and assign company badges to employees. This badge dates from that era.

Caterpillar Historian Lee Fosburgh says, “This is a significant donation – and the badge will take its place as one-of-a-kind in the archives. We appreciate Steve’s generosity and his willingness to share this historical piece with the entire Caterpillar family.”