A century ago, people of all ages went to see movies with far more regularity than today, often going more than once week. In the 1920s, the Caterpillar brand and its machines were becoming entrenched in popular culture. In 1927, Caterpillar partnered with Paramount Pictures to make a film called Man Power. It featured a 10-Ton Caterpillar tractor that was used to help save a town threatened by a breached dam that’s about to burst. It was a popular film, and because of our machine’s heroic role, a smaller Holt 2-Ton Caterpillar tractor was even used for the movie’s advertising posters!

It laid the groundwork for another, quite different film. That’s why Corporate Archives Manager Lee Fosburgh and fellow history buff, Rusty Dunn are digging into history on a movie that came along four years later called the “The Great Tractor Race.” It was another Caterpillar/Paramount collaboration, billed as a short film, played between Paramount films in theatres across the U.S., and used to fill time between double feature matinees.

So grab a seat and a bag of popcorn, and join Lee and Rusty in the theater as they take us through a film that many will agree is offbeat, slightly funny and interesting to watch. And an important note – contrary to rumors and myths about the film over the years – there were no safety issues and no one was injured during its production. It was staged for the filming, and the operators and stunts were done by professionals. Enjoy! 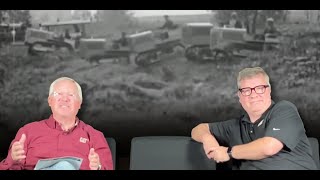