In October, thoughts often turn to bats, balls, hits, runs and errors. At Caterpillar, we’re remembering one of our very own who is considered by some to be the GOAT of amateur women’s softball. Carolyn Thome Hart worked at Caterpillar from a young age until her retirement in 1977, after thirty years of service. She passed away in 1996.

What history will likely remember most about Carolyn is that she was one of the winningest women’s softball players who ever lived. In addition to working at Caterpillar, she played on the Caterpillar-sponsored softball team, the Dieselettes. Although Caterpillar stopped managing the club in 1955, Carolyn played on various iterations of the team until retiring from the sport in 1962.

Nick-named “Cotton” for her trademark blonde hair, lefty Carolyn was a five-time All-American outfielder in the 1950s and led her team to 10 national tournaments during her softball career. She had a lifetime batting average of .301.

Carolyn playing for the Dieselettes in 1948.

Carolyn playing for the Dieselettes in 1948. 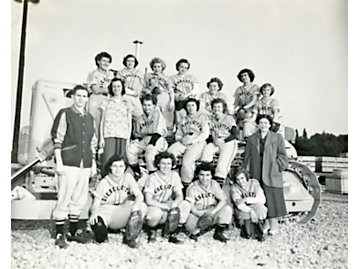 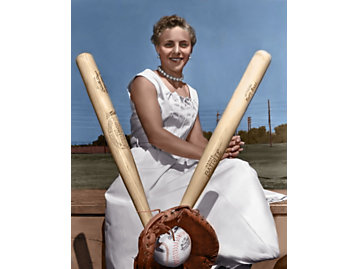 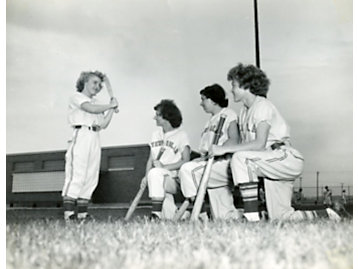 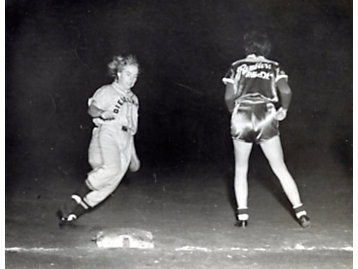 Dieselettes was the name given to the Caterpillar-sponsored women’s softball team formed in 1936 – an era when companies often sponsored recreational sports teams. The Dieselettes, comprised of Caterpillar employees, became one of the most successful and famous woman’s U.S. softball teams, at one point drawing thousands of spectators per game. The team is still recognized today as the oldest member-sanctioned Amateur Softball Association team in the United States.

Caterpillar stopped managing the team in 1955, and it subsequently underwent several changes; the team later changed their name to the Pekin Lettes.

All in the Family

Carolyn’s family boasts a number of award-winning batters. Among them is her brother, Charles “Chuck” Thome, who worked at Caterpillar for 40 years and had a distinguished amateur fastball career of his own. Chuck passed away in 2019.

Perhaps most notably, Carolyn’s nephew is Peoria, Illinois native and legendary Baseball Hall of Famer, Jim Thome, who hit 612 home runs during his professional major league career – the eighth-most of all time.

Caterpillar historian and Corporate Heritage Archives Manager Lee Fosburgh had an opportunity to visit with Carolyn’s brother Chuck a few years ago.

“From talking to Chuck, it was clear that the entire Thome family – who counts among themselves legendary ballplayers – considers Carolyn to be the best ballplayer in the family,” says Lee. “It’s great to be able to count her in the Caterpillar family as well.”

Learn more about what was happening at Caterpillar in the 1950s here.