The Night the Lights Went Out in New York

Forty years ago, a vast power failure plunged New York City and the surrounding area into darkness. The event prompted widespread looting and panic, and it was so disruptive to the lives of New Yorkers that it became a cultural icon captured or referenced in numerous popular movies and television series such as Blackout, Summer of Sam, and Ghostbusters II. The blackout is an event that many New Yorkers still remember vividly to this day, and its legend has grown to make it one of the more notable events in 20th century American history.

The New York City blackout was a bad situation, but it could have been much worse were it not for the actions of the Cat® dealer H.O. Penn Machinery Company, Inc., who sold more than 500 diesel-electric generator sets in the New York metropolitan area.

Thousands of fans attending a Cubs vs. Mets game at Shea Stadium were inconvenienced when the blackout hit, but a Cat D353T generator set allowed the stadium to be evacuated easily and safely.

There was looting and vandalism, but the situation probably would have been much worse if it weren't for two Cat D398 Generator Sets that kept New York City Police Headquarters fully operational. And at many hospitals, like Northern Westchester Hospital Center in Mount Kisco, doctors went on delivering babies, performing surgery, and staffing emergency rooms because our generator sets were supplying power.

There were a few problems, of course. But according to H.O. Penn, there were no malfunctions on the part of Cat equipment. At Belleview Hospital the standby electrical system, powered by five Cat D398 generator sets, operated for 40 minutes and then quit. However, a subsequent investigation demonstrated that the generators had not failed. A malfunction of the cooling tower pumps in another part of the building caused the system to overheat and shut down. Yonkers Hospital reported to H.O. Penn that only one of its two generator sets was operating. The operational unit turned out to be a Cat generator. The one that failed was a competitor's.

At Caterpillar we know the importance of making a quality product. Our reputation depends on it. But equally important, as the blackout dramatically showed – people depend on it. We are proud that our products came through in a time of crisis.

Read more stories from our historical collection at caterpillar.com/history. 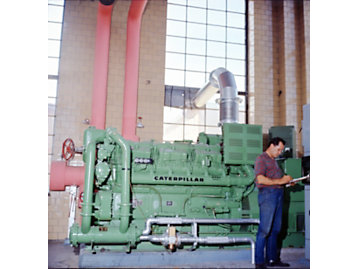