The San Francisco earthquake of April 18, 1906 ranks as one of the most significant earthquakes of all time. The quake and subsequent fires ravaged the city, left more than 3,000 people dead, and destroyed more than 28,000 buildings. The earthquake literally hit home for our two predecessor companies, Holt and Best, as they were headquartered and had factories in the San Francisco Bay Area.

Despite its utter devastation, San Francisco quickly recovered thanks to the help of some mighty machinery. Considered modern technology at the time, steam-powered equipment helped clean up the mess caused by the quake. Large Holt and Best steam tractors helped clear the immense amount of rubble, in an effort to help people and businesses reclaim what was lost. The use of these machines, in its own small way, led to the rebirth of San Francisco.

The work of these machines is documented in rare photographs taken following the quake. The two steam tractors, Holt No.37 and Best No.188, tirelessly worked to support the recovery effort. The striking images of these tractors are preserved and stored in our company archives, and we believe they represent the first example of our products being used to aid in disaster recovery.

Best steam tractor No.188 at work during earthquake recovery in 1906. 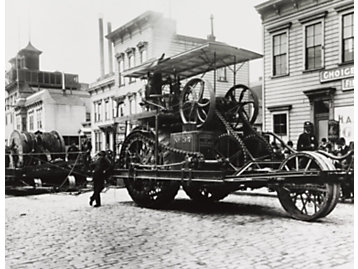 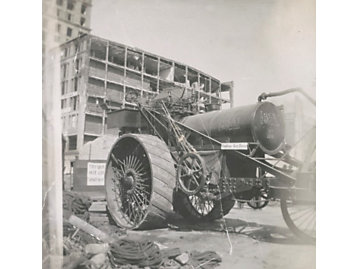