When Cat® Equipment Played the Role of Indiana Jones

During the years 1946 and 1947, the Department of Antiquities in Tunisia decided to conduct systematic searches at the site of ancient Carthaginian ruins. These ruins, discovered in 1887, were baths built in 163 A.D. by Antoninus and Marcus Aurelius during the days of the Roman Empire.

The Department of Antiquities decided to enlist Cat® equipment, not Indiana Jones, for the excavation. They obtained the machines from P. Parrenin, our Cat Dealer in Tunis. It somehow seems fitting that the archeologists turned to Parrenin (today called Parenin Cat) for the tools to unearth these ancient treasures, as they are one of our oldest dealers.

Although there was some difficulty in excavating because of a pileup of ground floor and second floor arches, the sturdy Cat D4 track-tractors, equipped with Traxcavators, carefully and completely uncovered several rooms that hadn’t been seen for well over 1,000 years. Without this modern equipment, the job would have been a real backbreaker.

In 1947 the center door of the baths was opened, revealing an immense room with a double row of fluted columns. Two unique statues, busts of Roman mythology's Mercury in gleaming black marble, were found well-preserved among the fragments. Equally eye-catching were the pink and violet-colored paving and wall facings of the baths.

Based on the size of the bath areas uncovered, the building measured 300 meters in width and 150 meters in depth. One wonders what other secrets remain undiscovered in this ancient structure. When they are all found, it will be said that Cat equipment and its dealer network played an important role in their discovery.

Operator poses on his Cat® D4 during excavations.

Cat®D4 with a Traxcavator attachment at work within the Carthaginian ruins. 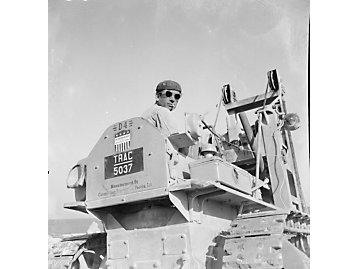 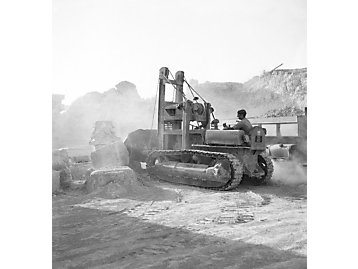