Dams have always held the promise of harnessing nature for the benefit of people, and this vision is exemplified by the dams built in this period. These massive structures were all built to be major suppliers of hydroelectric power, irrigation, and drinking water, as well as facilitators of flood control and improved navigation.

As is often the case when large equipment is needed on the biggest jobs – Caterpillar was there. In the 1930s, ninety-two percent of the track-type tractors on the largest construction jobs in the U.S. were Caterpillar® machines. They were the choice of contractors who needed power, stamina, and low operating and maintenance costs in their equipment. In 1935 alone, more than 350 Caterpillar track-type tractors were on the job. The impact their work continues to have today can be seen in four of these dam projects from the 1930s: Hoover Dam, Grand Coulee Dam, Fort Peck Dam, and Bonneville Dam.

Hoover Dam, originally known as Boulder Dam, was built on the Colorado River between 1931 and 1936. Named after U.S. President Herbert Hoover, the dam is still a major supplier of hydroelectric power, while also providing flood control, river regulation, and improved navigation. Today, it is also a major source of water to the City of Las Vegas.

Twelve of the legendary Caterpillar Sixty track-type tractors worked in the construction the Hoover Dam. They were involved in the construction of the diversion tunnels that were almost a mile long and allowed the waters of the Colorado River to flow around the dam site while the dam was being built. They also hauled large sections of pipe used in the dam, as well as overburden from the construction site.

Grand Coulee Dam, constructed between 1933 and 1942, is located on the Columbia River in Washington state, and it would almost be an understatement to say this dam is large! In fact, Grand Coulee Dam is the largest concrete structure ever built. Several other dams in the world are larger, but they include earthen berms. The Grand Coulee stands 550 feet tall, measured from its foundation in solid granite, and towers 350 feet from the river surface to its top. It is 5,223 feet long, which is only 57 feet short of a mile, and it produces hydroelectric power while also providing irrigation water.

Caterpillar Diesel Seventy-Five track-type tractors pulling scrapers made the largest excavations on the north section of the dam. Other Caterpillar dozers brought the perfect weight, power, and traction- a combination that made what a contactor called, “…dirt moving cheap on this job.” In addition to earthmoving, trees and brush were also quickly removed by Caterpillar equipment.

The Fort Peck Dam, built from 1933-1940 and located in northeastern Montana, is one of six major dams along the Missouri River. It is the largest manmade hydraulic dam in the world. The dam and the 134-mile-long lake it created are owned and operated by the U.S. Army Corps of Engineers and exist for the purposes of hydroelectric power generation, flood control, and water quality management.

There were twenty-one times as many Caterpillar machines working on this dam project as any other makers’ machines combined. Some of the first Caterpillar diesel track-type tractors ever produced worked on the construction of this leviathan. The fleet included the eighth and thirteenth Diesel Sixties to come off the assembly line. They were responsible for building roads, hauling elevating graders and wagons, and stripping gravel at the dam site. Their first year's operating cost was checked against that of two competitive gasoline tractors, and the reported savings was $3,000, which is almost $60,000 today.

Bonneville Dam, constructed from 1933-1938, tamed the Columbia River in the U.S. state of Oregon. It originally consisted of a spillway 1,450 feet long, 132 feet wide at its base and 197 feet high above the lowest bedrock, but there have been several improvements and enlargements of the dam over the years. In 1986, the Bonneville Lock and Dam project was placed on the National Register of Historic Places, and it was later elevated to National Historic Landmark status.

For each competitive tractor in use on the Bonneville Dam, contractors used 19 Caterpillar machines. Again, it was the Caterpillar Diesel Seventy-Five track-type tractor that carried the load. They made up the large fleet of Caterpillar equipment at work on Bonneville Dam. Much of their work included pulling buggies that were loaded with huge boulders.

The dams of the 1930s remain an inspiring presence on the American landscape. Their existence is as impactful as that of the ancient pyramids of Egypt. They tamed the mighty rivers that ran wild for millennia, while creating vast lakes. Water from these dams has turned deserts into orchards and slaked the thirst of millions of metropolitan citizens. Caterpillar equipment and our dealers have played a part in doing the work and making it happen.

Caterpillar Sixty track-type tractor hauls huge sections of pipe to be used in the construction of Hoover Dam in 1935.

Caterpillar Diesel Seventy-Fives pulling scrapers on the north of Grand Coulee Dam in 1975. 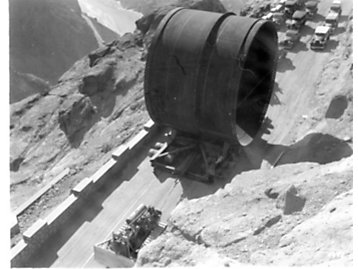 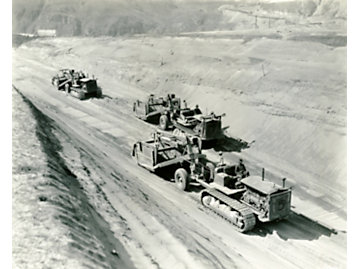 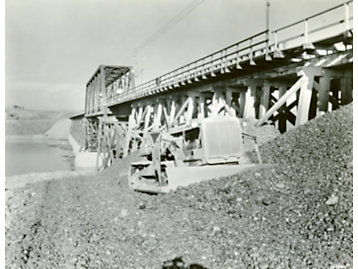 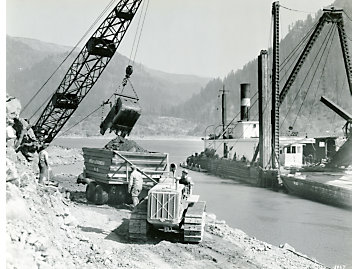