Caterpillar and World War I

Holt Caterpillar Co. and C.L. Best Tractor Co. probably never would have merged if it wasn’t for World War I.

Early in the war, Holt sold tractors to Britain and France for help hauling equipment and occasionally troops. After the United States joined World War I one hundred years ago, in April 1917, plant manager Murray Baker pursued a contract to supply tractors for the U.S. military.

Watch the short film in this article to see rare footage of Murray Baker showing Caterpillar machines to U.S. General John “Black Jack” Pershing and other members of the United States Armed Forces.

Holt’s contract with the government is in our company archives. There’s a note with it that says to build as many tractors as the company could.

To learn more about how Caterpillar’s history was shaped by World War I, check out these two articles written by Chris Kaergard of the Peoria Journal Star: 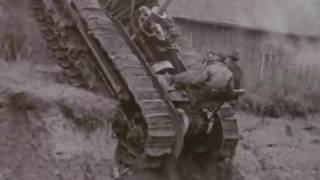