The Los Angeles Aqueduct was constructed over a distance of 30 miles from 1908 to 1913. It was built to transport water via a concrete-lined tunnel from the Owens River to Los Angeles, California. As Los Angeles grew in the late 19th century, it started to outgrow its water supply. Today, its legacy cannot be denied. Without a viable source of water, Los Angles could not have become the second largest city in the United States. What many people do not know is that Caterpillar machines played an invaluable role in making the project a success.

The Owens Valley aqueduct was designed and built by the city's water department, at the time named The Bureau of Los Angeles Aqueduct, under the supervision of the department's Chief Engineer William Mulholland. The project made Mulholland so famous the city even named a drive after him.

Part of Mulholland’s plan was to have a railroad built as close to the aqueduct as possible, but materials still needed to be hauled across the Mojave Desert. Enter Benjamin Holt, who had recently conceived and perfected the idea of a track-type tractor. His new, yet untested, invention became known as a Holt Caterpillar track-type tractor.

After an initial order of just a few steam and gasoline-powered track-type tractors (some of the first ever built), engineers on the Los Angeles Aqueduct project placed a large order for 25 Holt Caterpillar track-type tractors and 78 specially-designed Holt wagons.

These Caterpillar tractors hauled rock, cement, supplies and other machinery from the railroad to the Los Angeles Aqueduct. Loads weighed as much as 50 tons and the machines traveled at up to four miles per hour. The hauls ranged from 4 to 12 miles long through deep sands and up grades from 10 to 30 percent. A report from just one section of the construction project showed that 14 Caterpillar tractors hauled materials a total of 26,242 miles at an average of 20 cents per mile. Average costs per mile for hauls by teams of animals on the project averaged from 40 to 80 cents, thus demonstrating the significant cost savings of using the new Caterpillar Tractor.

Paul Weston, the Holt engineer working with the machines on the project, stated “We took heavy 25-ton steam shovels and compressors over those mountains and across waterless deserts that could not have been handled any other way without dismantling and taking a lot more time and money.” In addition to their ability to make difficult hauls, the steam and gasoline-powered engines were touted for their simplicity, as only one person was needed to operate a machine.

After the project was completed, many of the gasoline engines were pulled out of the tractors and sent to locations where gasoline power was needed. The frames from some of the worn-out tractors were used as steel forms for concrete work, and some of the working machines that remained after the aqueduct was completed were sold to private parties for farming purposes.

All told, 32 of the first 100 Holt Caterpillar track-type tractors went to work on the Los Angeles Aqueduct Project, which provided an excellent proving ground for these machines. Because of contract deadlines, Holt’s engineers were forced to quickly find solutions to mechanical problems.  From this experience came solutions and technical improvements to the Caterpillar tractor, such as all-steel construction, three-speed transmissions, better spring suspension systems, better clutches, and strengthened tractor parts.

Just as it did for Mulholland, the project made Caterpillar a household name. Its success helped Caterpillar machines obtain work to help build infrastructure in other great cities, such as New York, Chicago, and San Francisco. 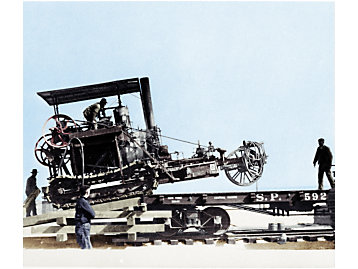 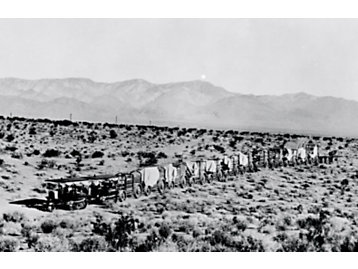 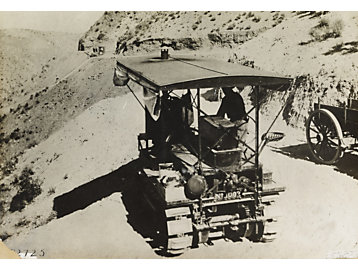