Dozers at work on the dam site.

Dozers and scrapers work on the Panama Canal circa 1962.

H.S. Eberhard is named Chairman of the Board.

W. Blackie is named Chairman of the Board.

Photo of the new headquarters taken in 1967. 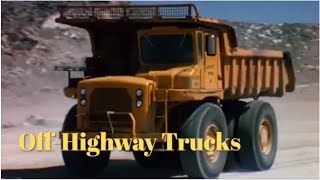 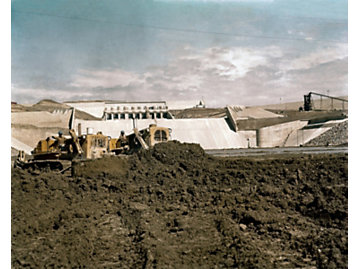 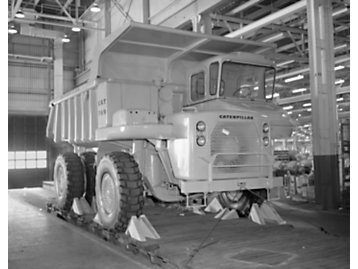 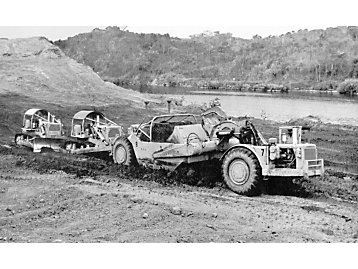 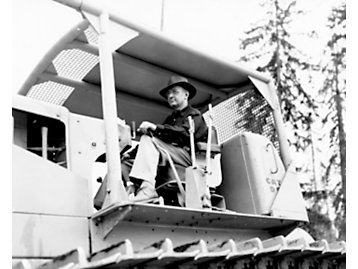 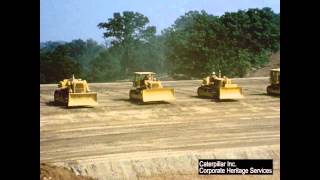 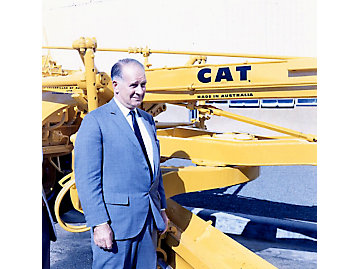 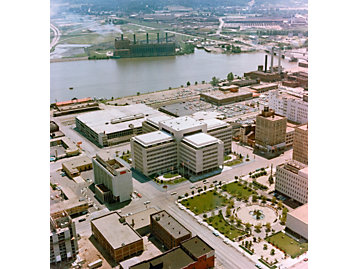 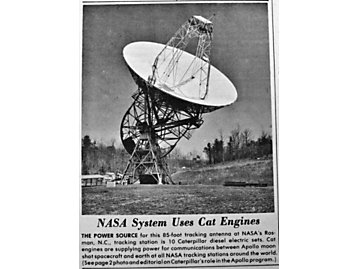 In 1967, Caterpillar introduced its first corporate symbol, four decades after the company was founded in the ’20s. The symbol was more than just a design mark.

As then-Caterpillar President Bill Franklin said, "It conveys a sense of purpose and the concept of change and improvement – important characteristics of this company."

Change and improvement. Those two characteristics had been part of the DNA of the company since the start and the ’60s carried that thread forward with incredible engineering breakthroughs, amazing new product and passionate people. All for one goal: helping our customers accomplish their goals on the jobsite.

The breakthroughs were major. In 1965 inertia welders, using a new welding process developed by Caterpillar engineers, were first marketed by Caterpillar for a wide range of industrial uses. Heralded at the time as a "breakthrough in the field of welding," inertia welding was capable of fusing both similar and dissimilar materials that in many instances were not practical to weld by other methods.

The powerhouse products of the decade included our first off-highway truck – the 769 – which debuted in 1962. These products were perhaps eclipsed only by our customers’ incredible projects where our products and services – new and old – were put to the test… More than 500 Caterpillar machines helped start the construction of the Mangla Dam in Pakistan, several machines helped widen sections of the Panama Canal, and Caterpillar engines supplied power for the Apollo 11 mission to the moon.

See more of the decade in the video here and meet some amazing people who contributed to Caterpillar below. 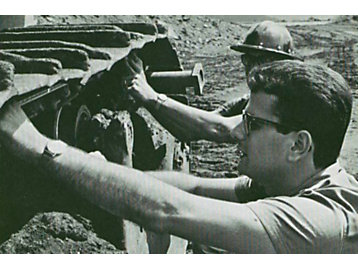 Rubens Almeida was an innovator in the world of Caterpillar parts and services in Brazil. He started working for Caterpillar in 1966 and was a hard worker who spent his days selling Caterpillar services and his nights completing paperwork. The local Cat dealer called him personable, extroverted, energetic, diplomatic and intelligent.

In 1968 he became the supervisor of Parts Sales Training and Promotion for all of Brazil. At the time, Rubens was one of only 56 parts sales representatives covering the world for Caterpillar, helping dealers do four very important things:

Rubens' territory included dealers in several eastern states of Brazil: Rio, Minas Gerais, Bahia, Goias, Sergipe, Espirito Santo, Guanabara and the Federal District of Brasilia, where the capital of Brazil is located. The territory is as large as Western Europe. He traveled 15 days a month – most of it by plane because of the distances, but in calling on customers, he also traveled by Jeep, by boat and on foot.

Rubens believed he could help the dealer parts manager do a better job promoting sales and training people by recommending certain new techniques. He said, “Diplomacy was of the utmost importance, especially when the manager may have started selling parts before I was born.”

Rubens went on to say, “The parts rep's role has changed over the years. Fifteen years ago, they would have been concerned only with inventory control, office efficiency and the storeroom.”

Just as today, Rubens recognized that showing value to the dealer on promoting parts and service has become an important part of the business. In 1968 his major accomplishment was promoting the value of custom track service, a new track-rebuilding service that not only proved to be profitable, but also made the dealer more valuable to the customer.

"The dealer who can offer both good parts and repair service has a real sales advantage over his competitors," Rubens said. "And the parts business is profitable to Caterpillar and to dealers. If we were to lose two-thirds of the business as the automotive industry has done, we might have to change our whole concept of doing business.”

Rubens Almeida believed in the importance of serving customers over the lifetime of the equipment – and that’s a commitment we stand by today with outstanding parts and services. 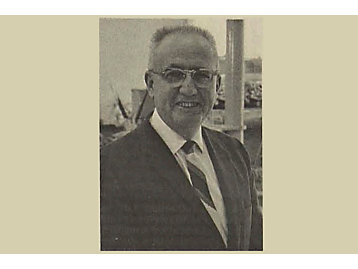 When he was 17, Carl left a job as a department store mail clerk to become a machinist apprentice at Caterpillar's San Leandro Plant. During his early years with the company, Carl worked on gasoline engines, especially carburetor and manifold research. "I have a fondness for any internal combustion engine," he said.

It was his work in the San Leandro Experimental Lab, just as Caterpillar started development on the diesel engine, that helped his career take off. "We thought the diesel engine was great, although there were some who thought it would be no more than an attractive sideline and that nothing would replace the gasoline engine. By 1940, however, all Cat equipment was powered by diesel engines."

In 1938 he moved to East Peoria, Illinois, to head the Diesel Engine Cylinder Lab. He was subsequently named staff engineer and then assistant director of Diesel Engine Research.

In the 1960s Carl was assistant to the vice president of Engineering and Research. Although he was keen on keeping track of other technology developments in the power field, diesel remained his principal concern. In the 1960s he worked closely with the company-wide diesel engine program, following both engineering and research progress.

Looking back on his past accomplishments all he had to say was, "My 40 years at Caterpillar have been good ones. I hope the 1960s bring more to come.” 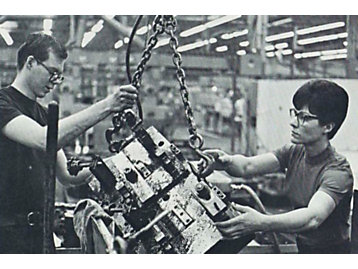 Elda Howe was a woman of the 1960s, a time when many people regarded workplaces as a “man's world.”  But in 1967 Elda got a job at Caterpillar working on a radial drill and a milling machine. She did well, and her training supervisor later encouraged her to enroll in the two-year machine shop training program in 1969. She applied and was accepted, and the rest was history. Elda said, “I see no reason why a woman can't do just as well as men.”

Surrounded by men in both the classroom and the factory, Elda he was the first woman to enter the two-year machine shop training program, a groundbreaking feat. Her instructor said, "Nobody paid a lot of attention to the fact that there was a woman in class. She's another trainee and, like the men, is here to learn."

Elda excelled in the program and graduated at the top of her class in May 1970. 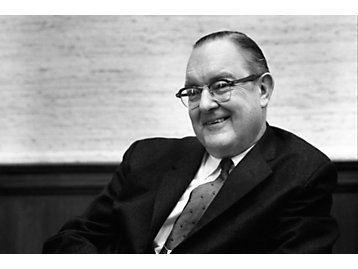 In 1967 Caterpillar President William “Bill” Franklin announced a major change at Caterpillar. It was an idea he had for quite some time, but he finally felt the time was right to inform the world that Caterpillar had adopted a corporate symbol for the first time in its history. Dubbed the “C-Block” symbol, it was applied on company facilities, products and parts throughout the world. Franklin said the symbol would be used to identify the company in various ways and sizes on buildings, letterheads, labels, forms and other materials.

"Since ancient times, symbols have been used to lend distinctive and memorable signatures," Franklin said. "Early craftsmen, kings and religious orders were among the first to use them."

"This symbol will be used to Identify Caterpillar and its products in more than 140 countries," Franklin said. "It will serve as a common and easily recognized signature ... and will overcome barriers to recognition and communication caused by differences in language." 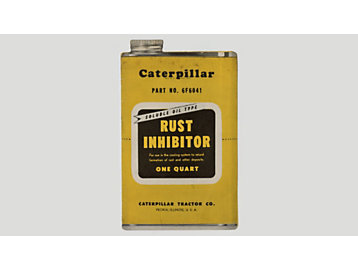 c. 1960 – Superior parts and services have been part of our DNA for over 100 years. This is a brochure cover for Caterpillar Rust Inhibitor. 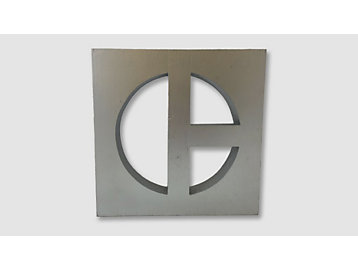 c. 1967 - Caterpillar introduces its first corporate symbol along with its seventh trademark design. 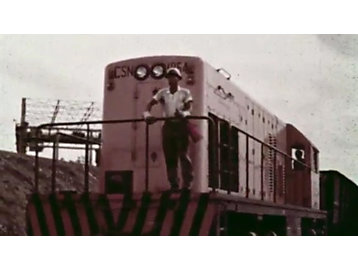 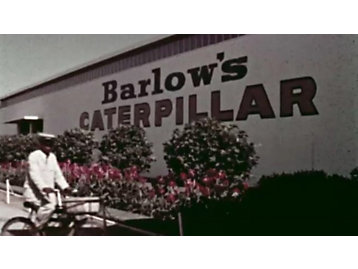 c. 1965 - Learn about the indispensable link between those who build the machines and those who use the machines on the job – we call it the Cat® worldwide dealer network.