As science, technology, engineering and math (Stem) Education expands globally, a teacher- and student-focused approach ensures that no one is left behind in the 4.0 economy.

For many students, especially those growing up in underserved and low-income communities, succeeding at math and science is not a matter of inherent skill: it’s a matter of access to the right type of education. Therein lies the brilliance of the ‘mobile fab lab’ model

A science laboratory that can be attached to a trailer and transported almost anywhere, the world’s first ‘fab lab’ came out of a familiar place — the Massachusetts Institute of Technology (MIT). In 2009, the fab lab drove across the United States, targeting students who normally wouldn’t come into contact with advanced technology. In the ten years since, the model has been exported around the world: from the townships of Pretoria, South Africa, to rural communities in France. 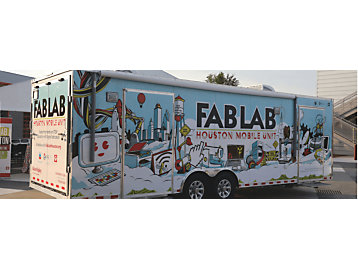 As global industries increasingly shift from version 3.0 to 4.0, educators will need to follow the trend — and Science, Technology, Engineering and Math (or STEM) education offers the way forward. For underrepresented groups, fab labs and other STEM projects can play an important role in changing the narrative around science and technology.

According to a study by STEM Next and the Charles Stewart Mott Foundation, students who have contact with a hands-on experience with math or science are 70 percent more likely to pursue a career in STEM than those who don’t.

In East Cleveland, where poverty rates exceed 40 percent and average annual incomes fail to reach $20,000, a fab lab sits outside of the MC2STEM high school, making trips to schools across the Cleveland Metropolitan School District. With its 3D printers, laser cutters, a vinyl cutter, a ShopBot, and electronics equipment, the lab performs a key role: it introduces students who may not have thought of themselves as “STEM people” to technology in a low-pressure, engaging way.

While the idea of STEM was born in the United States in the early 2000s, the challenges and opportunities of STEM education are increasingly global.

In the US, the economy is predicted to add more than 11 million jobs between 2016 and 2026, and most of them are in STEM fields. Sub-Saharan Africa already faces an upcoming shortage of 2.5 million engineers, who will need to address a host of development problems. India, which is also the second largest producer of STEM graduates in the world (after China), is training 400 million young people as part of their Skill India program — and actually has a surplus of highly-trained STEM students.

Worldwide, however, the STEM gap still remains large, especially for minority groups and those living in poverty. Just 4 to 12 percent of African graduates come out of STEM fields, and many end up leaving their country for economic opportunities elsewhere — a phenomenon known as brain drain. In the United States, only 11 percent of STEM positions are held by minorities despite these populations representing about 30 percent of the total population.

The underrepresentation of minorities in STEM starts, in many cases, outside of school. One longitudinal study identified the elements that distinguished students who decided to drop out of STEM programs from those who completed them. Participation in extracurricular science activities and family priorities with respect to college and STEM careers were at the top of the list. These factors tend to disproportionately affect low-income students, who can’t afford to pay for after-school activities. In fact, the wealthiest 20 percent of families devote seven times the amount of resources to after-school activities than the poorest 20 percent.

At school, other disparities can be exacerbated by a number of factors, including limited access to STEM programs, insufficient teacher retention, high-stakes testing constraints, and a number of other linguistic and cultural challenges. In many cases, limited funding for public education prevents the development of math and science programs. Even when STEM programs exist, many students do not complete them — because they are made to feel that they “aren’t good” at math and science. Education experts refer to this phenomenon as the “leaky pipeline.”

Increasing access to STEM worldwide is not just an economic question, but also a question of political will. A number of countries with less developed economies have pioneered STEM programs.

Rwanda, for example, invested heavily in STEM starting in 2003, and has seen economic growth surpassing 7 percent ever since. Malaysia managed to shift from being a country that largely exported agricultural products to one that exports electronics in less than a generation, lifting a whole generation out of poverty.

More than just a buzzword, STEM can and should be seen as a powerful development tool.